Fact of the Day: Siamese After-Math 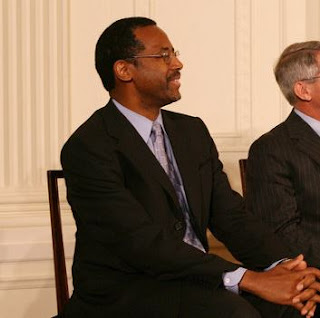 Before entering politics, Dr. Ben Carson's claim to fame was his career as a neurosurgeon which made huge news in 1987 when he led a 70-member medical team to surgically-remove infant Siamese twins conjoined at the head named Patrick and Benjamin Binder. The surgery looked promising as the boys had separate brains and they were successfully removed. However the success ended shortly after, both boys ended up in a vegetative state in less than two years. Their mother lamented having the operation done.
Posted by Adam at 12:00 AM

Email ThisBlogThis!Share to TwitterShare to FacebookShare to Pinterest
Labels: fact of the day, politics, republican

It was a brave attempt.

never knew that. That would be an awful end result indeed

he must be brilliant to perform surgery of that nature. how sad it was not successful!!!

You never hear that part of the story!

I recently found out about this.

That's sad, but as a mother, I would always wonder "what if" if I didn't do the surgery. A sad outcome, but I am sure lots was learned from the attempt so other surgeries in the future could prove to be a success.