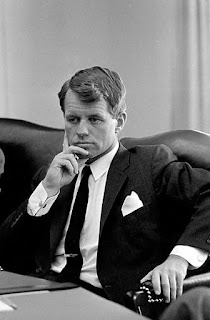 I strongly admire Bobby Kennedy and think it was a shame he was never president and it was tragic that he was assassinated just like his brother. While the U.S. government hasn't been perfect at this since 1789 (and honestly had a bad record of it until the 1960's), the running theme was the U.S. Constitution should apply to all persons with no favoritism. There are few folks out there who honestly think that the freedom of religion only applies to Christians. Or that the 14th amendment doesn't apply to children of Mexican and other Hispanic immigrants born in the United States which it certainly does.
Posted by Adam at 1:00 PM

It's a real tragedy that he and his brother were assassinated.

I remember staying up that night to see Robert Kennedy win the California primary and when I woke to the news the next day I was devastated.

Very tragic how he and his brother died.

It was a sad time in history

I always wonder how different things would be today had RFK and JFK lived.

Lets hope that madman and getting madder by the minute, Trump and now also the former Lord Mayor of NYC read the above words.
Colin