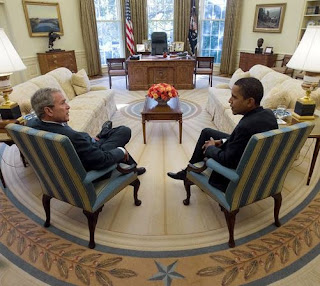 Eight years ago Barack Obama was just a candidate for President of the United States. I'm still proud to have been a supporter since 2008, but I still remember his first wave of haters. I was working in the frozen food section at the time of the election and some guy comes up to me and talks about Obama. He gave me the whole "he's going to give everyone free this, free that, and it will be horrible" line and then ended the long-rant by saying Obama was the Anti-Christ. This man's name was Elvis (obviously not the real Elvis Presley) and he looked like his parents were cousins and apparently Elvis was a wannabe country singer. Just think about this for a second, people like Elvis here vote every election. And if that doesn't scare you then nothing will.
Posted by Adam at 12:00 PM

It just kills me how some people are so uninformed about this stuff. Obama is NOT the anti-Christ, okay?

He's the ant-Christ. Know the difference.

It's always fantastic when strangers walk up and start talking partisan politics. Fantastic. Especially when I'm at work. Great stuff.

There's an official Trump Store ad up on the right corner of your page for me right now. I hear he likes the poorly educated. I'll bet your Elvis is a lot more fond of Mr. Trump than he was President Obama.

one of the worst

It's funny what people think and how bent out of shape they become.

hahhaa...well, Adam, you HAVE to know that I think NOTHING could
scare a Republican more than having HRC for president...

Paul Ryan, Romney, the Bush family, Senator McCain and a host of other Republicans with SENSE don't share your views.
Why lunatic Trump has got this far just shows how devoid the Republican party is of credible candidates.
Would you allow your grand daughters to be alone with Trump?

I am sick of all this Trump - bullshit. He has made the USA the laughing stock of the civilised World. They must be having
the biggest belly laughs in Beijing, Pyongyang and Moscow.

Amusing that the second confrontation of comedy took place in that backward state of Missouri!! A Town Hall Q & A session from so called questioners who seemed petrified and unable to deliver their written questions with any authority.
In any other country this would have been laughed off the map.
If only you, Ms Sassy Sweet and the Springfield, Missouri, Uni graduates of that "illustrious" city's university could see the cartoons here and no doubt in every other country in the World, you would hang your head in shame.

Here is one of the amusing comments on the St.Louis "mismatch".
The Catholic Archbishop of Brisbane: " Swore I wouldn't watch No.2 Presidential Debate but got caught in hospital recovery room with TV on. Had a relapse and straight back to theatre".
I reckon that sums the situation up PERFECTLY.
I watched the "TV Looney reality show" with mates in a bar.
Certainly kept the drinks going as we laughed our heads off at Trump.
Colin
PS: I suspect you have a bottle of poison to take on the 8th November. Thank God as the 8th November is our Melbourne Cup day (horse racing) and we are a day in front of the USA so our Cup will not be messed up with this election result. Go Hillary.
PPS: Not one US accent to be heard in Brisbane, but plenty of similar accents from people who say they are Canadians????