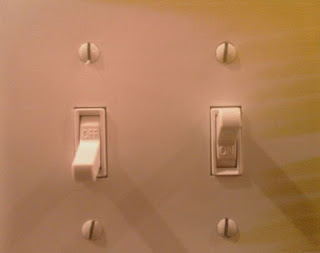 When you work with the general public you see all kinds of folks. You can always tell which of your male co-workers are the most pathetic when they're all over the place trying to take a peak at every attractive woman that passes by. But I admit, when a woman looks really good it's hard to look the other way. One day there was lady wearing a gym-like outfit and I only saw her from the back, but she looked amazing. Then she turned around and she looked much older and certainly uglier than I ever expected. My former manager Jesse came up to where I was and the lady had turned the other direction. I saw his eyes and face focus straight on her, and I tell him "wait until you see the front" and he responds "that's what light switches are for". Jesse later went to work for another department and he was let go a few months into his new role. When I heard the rumor that he was sleeping with one of his female subordinates, I didn't really doubt it.
Posted by Adam at 12:00 PM

Jesse sounds like a real pig. No harm in a little appreciative glance at an attractive person, but to get all bug eye staring or sleeping with a subordinate... that's just ick!

Kind of funny about the light switch, can work both ways!

Sorry to be laughing more than I should be at this story.

Nothing wrong with looking. We all do that!

It's one thing to SAY things that aren't very nice...quite another to DO things that we all know is wrong...