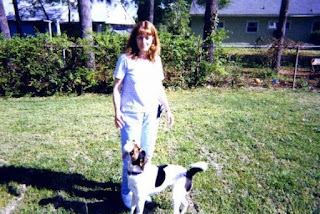 When my late dog Zelda was just a puppy, she had a terrible time teething. Her favorite thing was socks and pantyhose. She was so quick and wily that she could almost always take them right from us and run away until she was bored. We got tired of it but I couldn't think of way to deter her. So I grabbed a sock from my gym locker and made it STINK in every-way possible I could think of. I put it under the kitchen table so she'd have to find it on her own. And I watched her as she went for it. She picked it up, and then spat it out. Then she picked it back up... I gave up after that. She eventually phased out of it.
Posted by Adam at 12:00 PM

It sounds like she was going through a tough time. And so were the rest of you. Cute photo.

You must have done too good a job of making that sock smell bad.

Not ours. We call Wiggy the sock monster and the stinky socks are her MOST favorite.

What smelled bad to you might have been perfume to her. Too funny!