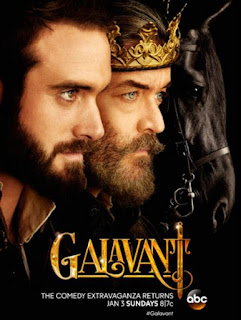 I remember looking forward to Galavant last year as it kind of filled in the gap between the fourth season of Once Upon a Time during its break and something had to fill the void. Some people can't tolerate musical shows or movies but I don't mind them. Especially if the songs are original. I enjoy the quirky humor of the first season and got upset it left us on a big cliff-hanger. Galavant wasn't the biggest success last year but gained enough support to garner an additional story. But did the second season prove itself strong enough? Or will all the medieval singing come to a bitter end once and for all? 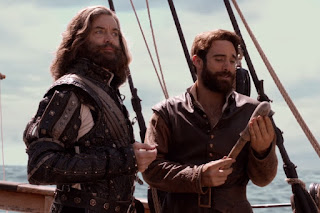 The story takes place some time after the fall of King Richard and Galavant. Stuck in a boat for exile, the pair eventually make their way back home to Valencia. When the first step on dry land, they return as friends not the bitter enemies they once were. But to be honest, Galavant has a high tolerance for King Richard's stupidity as it often gets them delayed from getting back to where they were suppose to be. King Richard wants his throne back, while Galavant wants to rescue his one true love which he really knows for sure it's the right woman this time. But things will be difficult for both of them. 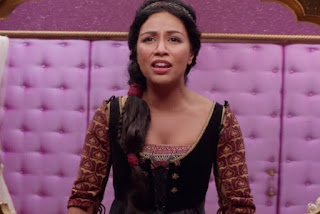 Galavant's love Princess Isabella is kept a prisoner by her parents who want her to marry Prince Harry. The young prince is eleven, and her first cousin. All she has to hope for is that her hero Galavant will come to save her. Queen Madalena has seized power of the throne for herself and King Richard's old pal Gareth has essentially becomes the King. Though he is second fiddle to Queen Madalena who obviously doesn't want to be just a consort anymore. And a evil sorcerer named Chester Wormwood arrives and uses his role as "wedding planner" to take a behind-the-scenes way to take power for himself. Who will be the one true King to unite the kingdoms? Or is the whole land doomed to idiots? 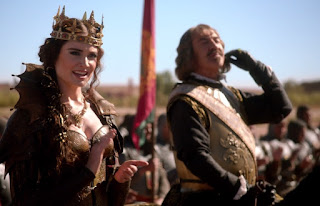 If you haven't heard by now, but Galavant's 2nd season will be its final one. I'm not too surprised as the first half is very unpolished and the story is rather boring. It picked up the ball later on but it was too little too late. Luckily they don't leave on a massive cliff-hanger (but hint at a future story) like last time so I can deal with that. It was a cute idea for a show and while I'm not bitter about it's cancellation I wasn't really wishing for a third season anyway. I hear Karen David (Princess Isabella) will be Princess Jasmine of Aladdin in the newest season of Once Upon a Time so at least one of the actors got a new gig.

It was an amusing idea and I did enjoy the first episode but found it tedious thereafter.

I heard great things about this show! I may have to check it out.

The really big rock that I live under, doesn't get this show.