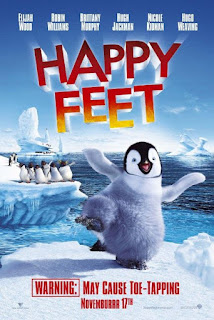 I don't really have good memory of Happy Feet coming out in 2006 and I certainly wasn't interested in seeing it. But my wife Daisy likes penguins and I wasn't too shocked this one popped up on her list of things to watch. Now don't get me wrong, I like animated movies but this one looks to be a movie that's not very clever. And by that I mean it seems like it can't entertain anyone outside of elementary school. During the Oscars for the year of 2006, Happy Feet won the award for Best Animated Picture which is an impressive feat. Could Happy Feet really be that good? Or is it just as bad as I had feared it was going to be? 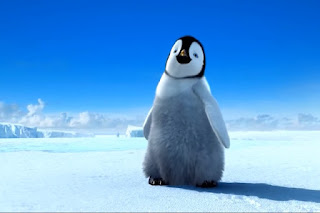 The story is mainly about a community of Emperor Penguins. To mate, a male and female each sing a song and if they have chemistry then they will be "married" in a sense. A female penguin named Norma Jean ends up with a male penguin named Memphis. Males look after the eggs while females gather food for the winter. In a brutal windstorm, Memphis loses grip and the egg is lost for a few moments. He gets it back and doesn't look too surprised when the egg doesn't hatch at first. However baby Mumble emerges eventually and Memphis is relieved. The new father Memphis is well-aware that his son likes to move his feet around like he's dancing. Emperor Penguins sing, but they do not dance. 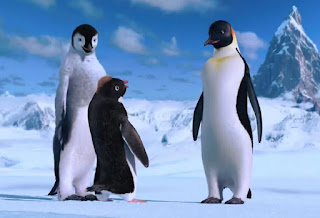 Mumble's parents assume he'll grow out of it, but it's realized that Mumble can't sing...literally. Even the best teachers prove to be pointless and everyone wonders what happened. Memphis keeps the fact that he lost the egg for awhile a secret. But as Mumble grows up the community will start to resent him. Especially the elder penguins who believe that a deity is the reason they find fish and if Mumble dances he'll anger the great god and their food will vanish. Mumble refuses to accept this and goes out to find a real reason why the ocean has so little fish for penguins to eat. But will he find the answer or spend his life shunned into exile? 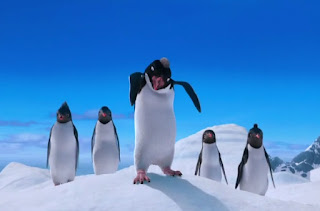 I honestly think that Happy Feet winning an Oscar was a real blunder. But then again there was only two other movies in consideration and one of them was Cars which wasn't Oscar-worthy for sure. The animation holds up ten years later, and the voice-cast is impressive. Though Robin Williams voices two characters that often shared the same scene which is a bit confusing. I liked the metaphors and message in the movie but the story isn't so grand. It almost feels like the penguin version of Rudolph the Red-Nosed Reindeer except that story never lost my attention. It's almost two hours which is rather over-doing it for animated movie. I hear the sequel didn't fare well with critics so I really hope Daisy doesn't want to see that soon.

Nah, that doesn't sound like my cup of tea either!

LOL- I am not much on animated films--but the little kids in our family liked this one. I did think it was a tad long time-wise.

Grin. I didn't see this one. Two hours does sound a tad-bit long.

Love the title, but I've never seen it.

I'll give it miss too.