My Dog Zelda Passed Away Today 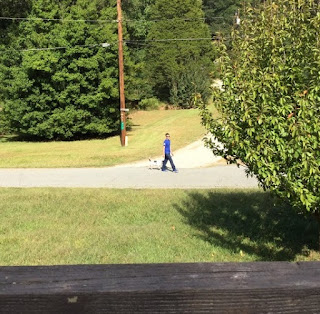 I learned about three weeks ago that my dog Zelda had some health issues that would lead her to live a half-life of sorts and after much thought we decided putting her to sleep was the wisest option. We put her down today before the health issues became a serious problem for her. I wished we could have delayed it longer but it was the best thing for her. My wife Daisy took this photo of me and my dog on a walk on the day of finding out the news. I've had her for about a decade and half since she was a puppy. I'm not emotionally okay right now so I will absent for a bit. You'll still see things from me like Facts of the Day which were pre-written. Neko Random doesn't stop even when I'm out of the picture.
Posted by Adam at 3:12 PM

Oh, I am so sorry and so sad for you.

So very sorry for your loss Adam.

Oh I'm so sorry Adam. It is so hard when a pet dies because they are so much more than a pet. I still miss my Sammy Jo and it's been quite a few years.

I'm so very sorry to read this Adam.
Sending my good thoughts to you.

I'm so sorry to hear this, Adam. It is heartbreaking.

I understand perfectly what you are going through. We had a dog once that was really partial to my husband. He also got sick and I had to be the one to take hi and have him put to sleep. My husband just was not up to it. I will never do it again.

Awww..Adam. I am so sorry for you. Losing a pet is such a terrible thing. They are like a part of our family-or like a child. It is just heartbreaking and I am so very, very sorry. Have Daisy give you an extra hug from me. Hugs- Diana

My condolences on the loss of your pet. I've been there and no what a hole a pet can leave in your life when they're gone.

I'm sorry to hear that you lost Zelda. Pets are a very important part of our lives. You did the rioht thing to not let her suffer.

I'm soooo sorry to hear about your dog :( I know they are like family members and I know how it feels to lose one, it's a grieving process. When I had to put my dog down, it took a while for me to be ok and the Rainbow Bridge poem made me feel a little bit better.

Awe I'm so sorry. Our furry friends are such an important part of our families.

Never easy indeed as they are a family member like any other.

Very sorry to hear this.

You did the humane thing. Sad but necessary.
Colin

Oh, Adam... I'm so very sorry. It took my brother a while to recover after the loss of Pugsley. I have to take a break soon too.