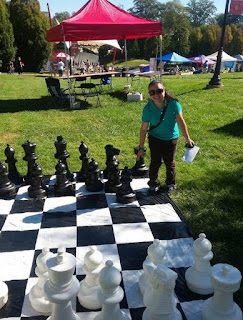 Even though I really dislike chess, I always want to play Big Chess at the Spartanburg International Festival every year. Daisy forgot how to play chess so it went pretty bad for her. She even didn't remember how paws moved. So forget knowing much about the Queen, rooks, knights, and bishops. Nor could she probably tell which was the King or the Queen. 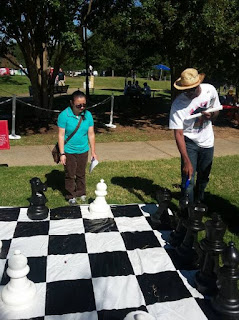 Some Haitian people came up to Daisy seeing how awful it was going for her and helped her play. The folks from Haiti loved chess and helped her from not just making mistakes, but helped break my defense. To be honest I didn't have much of a defense with Daisy at first, as it was almost pure offense. Which was a bad move on my part. 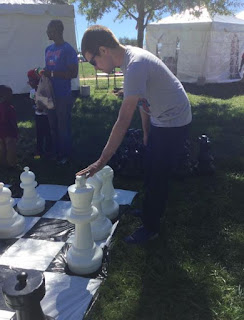 As my King got boxed in and I was trapped. I was beaten. So Daisy won even though she had help.
Posted by Adam at 5:00 PM

I've never learned to play chess.
The big board looks like fun.

These big boards are fun!

Definitely not my game. Never saw one this big either.

I played chess in high school but I haven't played in ages.

Good for Daisy, glad she got some help!

This looks kind of awesome. My brother and I would probably go to town with this.

WAY TO GO, DAISY...haha..it's always fun to beat our sweeties in a game.