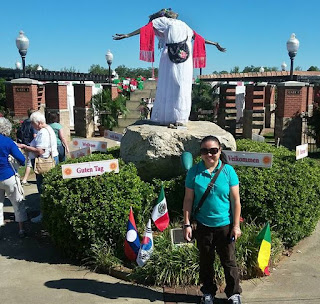 Despite being stuck in the Bible Belt with plenty of racists, my city of Spartanburg in South Carolina has a 30 year tradition of hosting an international festival which is pretty darn popular. Every event in Barnet Park has the statue dressed up as something. Mexico was the honored country of the year so she was dressed in a rather Aztec garment. 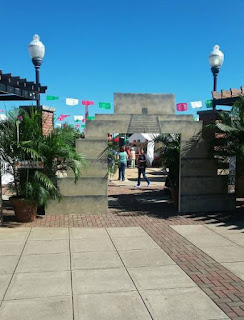 When walking into the park you can see this opening that is painted like an Aztec pyramid. Funny thing is that I mixed the paint at work for the people who painted the thing. So I knew this was coming. I even helped them pick the one color I made for them and I think it came out pretty well. Though obviously all the talent lies in the artists. I can't draw or paint very well myself when it comes to "art". Japan was the honored country two years ago (there was no event last year due to rain) so the main front was just for Mexico. The little tents get too crowded so I rarely ever look in them. Japan had a cool drum display in 2014 and the only thing Mexico had was were you could wear a hat and hold maracas for a picture. That had a huge line and it seemed a little over-the-top for me so we skipped past it.
Posted by Adam at 5:00 PM

You did a good job mixing an appropriate color.

Interesting festival, thanks for sharing!

Festivals can be very fun. Hope you all had a good time.

I love festivals like this. They are always so fun!

mixing paint..? I thought you worked in a supermarket...

over four years ago