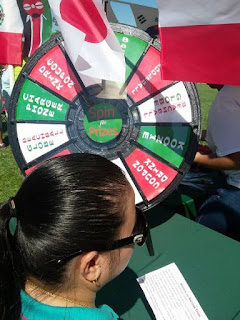 At the end of our trivia hunt we were to take our answers up to the table and spin the wheel for a prize. We saw the line was short but it took forever. A lady from the Romania tent told them the answer they had was wrong. Which is reassuring right? The event was mostly staffed by volunteers most of whom were teenagers who obviously never held a job before. 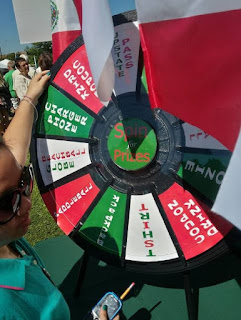 But they took both of our answers as right, so Daisy spun the wheel. I think she mainly wanted to do it just to spin it. I spun it so hard one of the papers flew off. We got it back though. 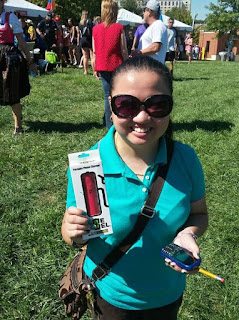 They said Daisy won a "phone charger" but it's really a power bank which is like a battery you can hook your smartphone up to. Daisy has one already but another won't hurt. 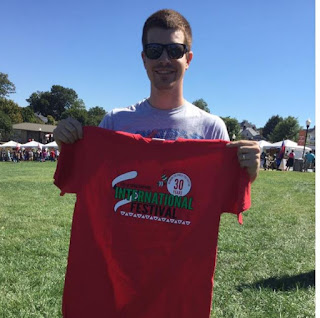 I spun and landed on a prize that apparently didn't exist. So they told me to pick anything I wanted except the best prize which was a t-shirt. I asked to just spin again as I don't see the fun in that. I got the t-shirt to my luck. Daisy wanted this one bad and she was a bit upset they no longer were letting people get one out of their own pocket. Apparently the only way you can get it this year was by winning this wheel thing or being a volunteer though their shirts were different.
Posted by Adam at 12:00 PM

At least you both won a prize.

You both did okay!

give the shirt to her if she wanted it really bad..she'll love you forever. :)