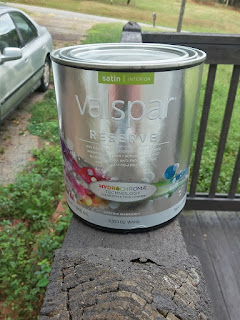 When I got my house, I knew the garage needed to be painted. I don't know why but they didn't take very good care of it. Dirt, bugs and whatnot had been a problem. While a flat finish is most common for ceilings, I wanted to do mine in satin for the durability of it. I found some Valspar Reserve (which is their best kind of paint) quarts that ended up at Ollie's for not that much and they were ironically less in a quart than they were in a gallon size, which meant I could get four quarts for less than a gallon. The color is just plain Valspar White which is a little more "gray" white than their super-white known as Ultra-White. 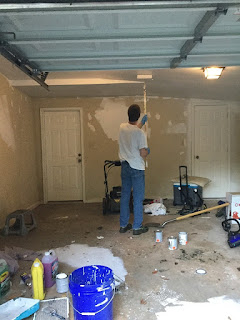 But it covered really well and the ceiling looks ten times better than it did. The only good thing about painting this garage ceiling is their no real prep work besides a general cleaning. You start from top and work down to the bottom. Who cares if you get it on the wall if you paint the wall next? The floor is going to be the fun one... Especially moving all my stuff around and cleaning every piece of dirt. I later used what was left in one of the cans to do a coat on the trim which is old and nasty looking. Covered most of that in one coat. I might top it with another coat of something else later or keep it the way it is.
Posted by Adam at 5:00 PM

Got your work cut out for you. Painting ceilings is the pits.

What a good feeling of accomplishment you get doing a job like that. Did Daisy help?

we painted a garage once and used all "oops" paint from Walmart...worked great

Your garage is going to be a showstopper when you're done painting! You won't want to store any crap in it and mess it up!

Nothing like getting a bargain on paint - stuff is so expensive. And there's nothing more gratifying than seeing the fruits of your labour (even if it's the garage).

I like my garage, it's also my work station when I putter and build things - it is unfinished but I like it that way. Mind you, if you're for hire...

This is going to look so good after!

I always think garages look good all nice and clean and painted.