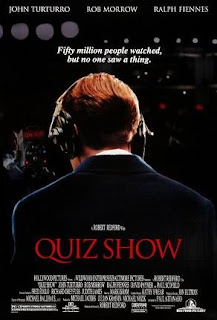 I honestly had no idea Quiz Show existed in 1994 and still had no clue until recently. The movie is mainly about a show called Twenty-One back in the 1950's. It was a trivia game-show back in the very early days of television. And to appeal to more audiences they did some things that they could never get away with today. Which got them in major trouble with U.S. Congress. I mainly wanted to see it because it was critically acclaimed and nominated for the Oscar for Best Picture for the year of 1994. I also noticed that Ralph Fiennes was in it, and he is best-known world-wide for playing the treacherous villain Lord Voldemort in the Harry Potter film series from Goblet of Fire on-wards. In this movie he's more of a protagonist which I don't get to see him much as. 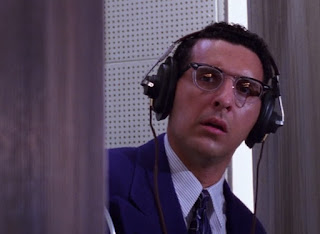 During the 1950's NBC has ran one of the first of its kind game shows. Twenty-One is a show where two contestants are locked in sound-proof booths and must compete to get 21 points by answering trivia questions before the other one does. The reigning champion Herb Stempel is a Queens native, who is popular in his neighborhood, but NBC's producers realize that most Americans are growing tired of him. The producers fall in love with Charles Van Doren, a Columbia University professor who at first don't get what they want him to do. They want Herb Stempel to fall and for Charles Van Doren to take his place as the champion. They do this by giving Charles Van Doren questions he already knew, and pressuring Herb Stempel to miss his questions when the time was right. The American public however has no idea. 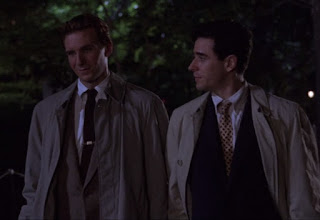 Charles Van Doren only realizes what went on shortly before the first show ended, however he continues the charade by simply letting them give him the answers. He feels guilty after awhile and tries to make things more "moral" but NBC producers are not as thrilled about his plan. A Washington D.C. lawyer named Richard Goodwin goes up to New York City to investigate the matter. His bosses think it's a dead case and that he's simply grasping at straws to solve a crisis that doesn't exist. But something really dark is truly going on. And it seems that nobody but a disgruntled Herb Stempel is going to be willing to give him any help. Though even the young hopeful lawyer won't exactly no who to trust anymore. 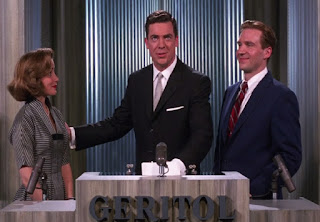 I can certainly see why Quiz Show was nominated for the Oscar for Best Picture for the year of 1994. Forrest Gump would go on to win the award but Pulp Fiction was also in the running that year as well. I'm not that surprised Quiz Show didn't win the Oscar as that's some heavy competition.  Now since it's based on history there are some quite notable historical inaccuracies. But I will say it's just a very entertaining movie. And for the most part, this is really what happened back in the 1950's which showed how deceptive the business of "show-business" used to be. Like many Oscar-nominated films, it wasn't a smash hit at the box office so it has remained largely forgotten but I'd recommend not looking the other way.

Still one I have yet to watch, have to get on that

I saw this one on Netflix & was really enjoying it but didn't get to finish because it was really late. Thank you for reminding me to finish watching it!

This is one of my favorite movies.