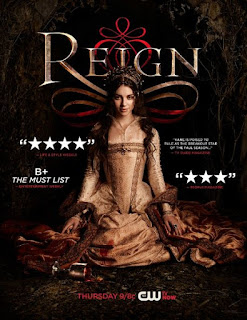 I had been pondering about watching Reign for a few years now. I knew it was about Mary. Queen of Scots a historical Queen with a notable legacy of people who hated her and loved her as well. She was the great-granddaughter of King Henry VII and was considered by Catholics to be the heir to the throne when King Henry VIII's daughter Mary eventually died. I'm a bit wary of watching shows/movies based on history as they make many "liberties" with it and end up screwing it all up. Does Reign hold up as a entertaining show and a show that is true to the history on which it is based upon? 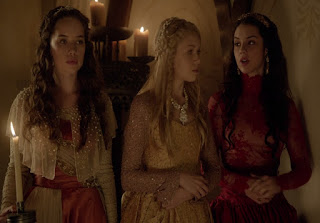 The story begins right as Mary, Queen of Scotland is about to be a "woman" and moves out of her Catholic convent after an English plot to poison her fails. She returns to French court to fulfill a long-time engagement to Francis, Dauphin of France who is to be the future King upon his father's death. She is kept company by her handmaidens; Kenna, Lola, Aylee, and Greer who may be her only true friends in France. Her engagement to Francis was created for political reasons as Scotland need's France's aid to protect herself from the English. France will essentially control Scotland through the marriage as Francis will be King-consort of Scotland. Francis' father King Henry II is a very power-hungry man and would like nothing other than to rule about half of Europe. 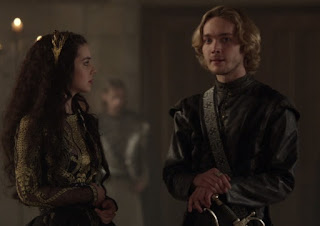 When Mary and Francis reunite (they knew each other as children) things go well and bad at times. She doesn't like how he's had romances with other women in the past, and can be quite controlling. Francis has a bastard half-brother named Bash (short for Sebastian) who is the King's favorite son personally but his lack of legitimacy means he'll never be King of France. Bash doesn't really want the crown, but he does want Mary's heart. Mary also has to look out for her future mother-in-law Catherine de' Medici who plots against her when Nostradamus tells her a vision that Mary will be in some part responsible for the death of Francis. Outside the castle, foreign threats are everywhere and so is a pagan cult that does dark and terrible things at night in the woods. 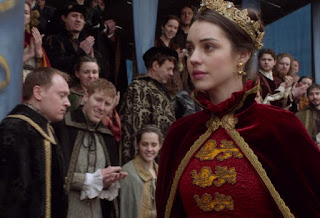 Reign starts off rather slow (the 2nd half is five times better than the first) but I'd really started to like it a lot by the end of the season. Part of it dragging a bit is that it's a rather long season just like most shows on The CW. I'd rather have ten awesome episodes than 22 unbalanced ones. Historically it didn't do as bad as I had imagined, though Mary and Francis were much younger in real life when they got married. And the real Mary Queen of Scots was rather ugly compared to the beautiful Adelaide Kane. There are some notable inaccuracies but most of them fit as something you could say happened but just was never wrote down in history. I'll more than likely start the 2nd season, but not real soon as I need a break from it.

I couldn't agree more, Adam. I'd rather have ten awesome episodes than 22 unbalanced ones. How difficult could it be?