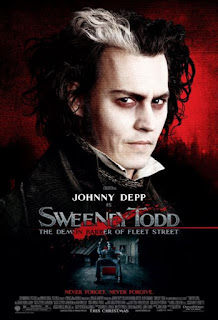 If Tim Burton wants to know the honest truth, he works just too much with Johnny Depp. Which has kind of de-motivated me to see his films. But since it's near Halloween, I figured I'd give Sweeney Todd: The Demon Barber of Fleet Street a chance. I assumed this original but it's based on a 1979 musical of the same name. The musical itself is based on a rather strange tale from the Victorian era that morphed into a bigger story. Though to most of us in the 21st century United States of America, I think Tim Burton's version is the only time we've heard of the character. I wasn't quite sure what the movie was about, and I didn't know it was a real musical until everyone started singing and trust me they don't ever stop. 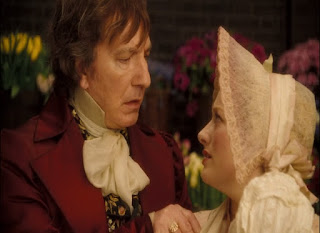 The story is about a barber who has returned from imprisonment on false charges from Australia to his native London. He was once a man known as Benjamin Barker who was married to a beautiful blonde woman named Lucy and they had a newborn daughter named Johanna. A powerful local official named Judge Turpin admires Lucy's beauty and wants her for his own. He sends his men after Benjmain leaving Lucy and Johanna all alone. Turpin tries to woo Lucy into marriage but she remains faithful to Benjamin. But that seems to not to have mattered as the two would be separated by fate. Not long after tragedy strikes in more ways than one. 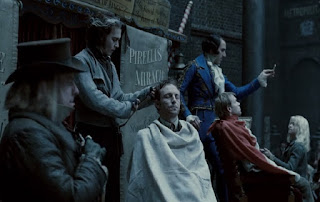 Many years later Barker returns to London under the name Sweeney Todd. Bitter and jaded over what happened, he only has one thing on his mind. And that one thing is bitter revenge on Judge Turpin and anyone who stands in his way. But he's also curious to find out what happened to his wife Lucy and his daughter Johanna. He almost accidentally befriends a horrible meat-pie baker named Mrs. Lovett and the two begin his quest for justice. However the path of vengeance is not easy, and Sweeney Todd will have to do a lot of work if he's to bring peace to the man he once was many years before. 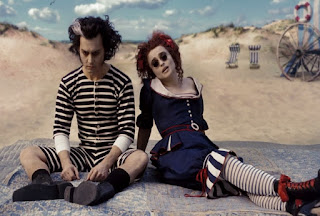 I'd say this movie version of Sweeney Todd was better than I expected years prior but not quite as good as critics had liked it. Like many of Tim Burton's movies, this one is clever and weird which I like for the most part. But I thought Todd's motivations for his wrong-doings were questionable and the plot is rather predictable at times. While I didn't find the singing bad in this one, it's not Les Miserables either. I did enjoy seeing Alan Rickman, and Timothy Spall join Helena Bonham Carter as it's kind of like a big Harry Potter reunion though in 2007 the series was not over yet. But I think all of the incredible actors in this movie have been in better things.

I tried to watch this but when I understood that's musical I decided don't watch this to the end.

I've never seen this movie, Adam, and I appreciate your review. I really like the main actors in this film ~ might have to catch it, if I ever get home and can watch it! Have a good weekend!

There's singing? No thanks!

I've seen this one. It was alright.

I've never been much of a Tim Burton fan - although this film did have a very good cast.

I really love this movie!!<3