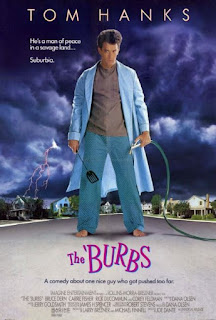 Even though I just finished seeing it for the first time, I've known of The Burbs for almost forever. When I was younger my mother had a big entertainment center/cabinet, and I remember seeing so many of the VCR tapes we had all piled up. The Burbs was one of her (or my dad's) movies and while it's not a movie like Friday the 13th or Nightmare on Elm Street I certainly had no interest in it back then. But now almost 30 years after the movie came out, I decided it was about time to give it a shot. After-all Tom Hanks is in the movie and this was when he was still pretty early on in his career. This was after Big but a good bit before Forrest Gump. Now the better question is if the movie any good or not? 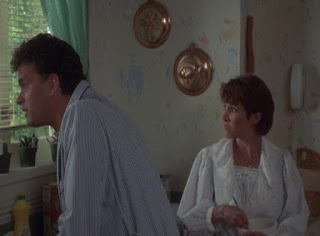 Tom Hanks plays a dad and husband named Ray Peterson. Ray and his wife Carol have a son named Dave. Life is fairly standard in their suburban home. Their neighbors could be a little better. There's Walter Seznick who lets his dog leave "chocolate ice-cream" in everybody's yard. Then you have Lt. Mark Rumsfield who is a rather kooky war-veteran with a much younger wife. Then there's the teenager Ricky Butler who is a waste of space. Last and probably least is Art Weingartner who is beyond dumb, delusional, and paranoid. He plants an idea in Ray Peterson's head that should be non-sense but starts to get to him. 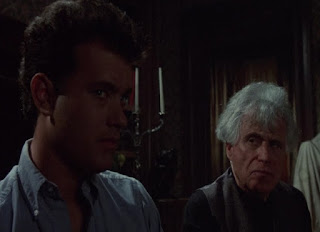 A month prior a family known as the Klopeks moved into the neighborhood. They never really ever appear except at night, and Art thinks they are secret murders. Ray is skeptical at first but gets paranoid himself as time goes on. He tries to introduce himself but when he knocks on the door of the spooky house it nearly falls apart and he's attacked by bees. Ray and Art get most of the other neighbors interested in their suspicions with most starting to think the same way. Especially as some strange stuff happens at the house during the peak hours at night. But when they finally meet the Klopeks, will they know for sure who they are? 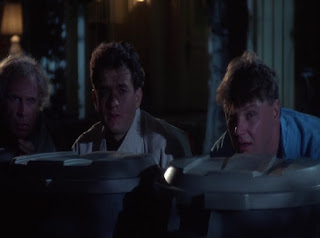 I was really let-down by The Burbs. It's acclaimed a bit of a cult following over the decades, but initially critics mostly panned this movie. And most critics were 100 percent right with this one. It's not really that bad, it's just not really that good either. It feels like a silly sitcom episode that drags on for far too long and doesn't make much sense in the end. Granted it has its moments but I was fairly bored by it. It was kind of spooky which is good for Halloween time I suppose. Luckily for Tom Hanks, the movie was a success at the box office, and he continued to have an amazing career afterwards.

It wasn't bad, but surely wasn't his best fun movie

Hmmmm.... I've never seen this. I guess I'll skip it. I love Tom Hanks though.

This is one of the few Tom Hanks movies I haven't seen.

For me, this movie gets rated MUCH higher. It's what I think of as good cheesy

It's seems like forever since I saw this movie. I don't remember if I liked it or not!

I'm one of the peeps who really loved this movie...as in, I think I've seen it literally more than a hundred times! I just really loved the campiness and stupidity of it all, and I thought Carrie Fisher was great in it, and gotta love his neighbours/friends...hehe...

ooooh man, i LOVED this movie. haven't seen it in years, i must change that!!!!