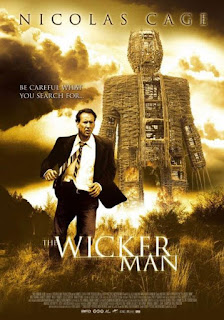 The Wicker Man is a movie I've been trying to avoid for quite some time. Around 2009 or so I saw the original The Wicker Man that was made back in 1973. It was a horror movie but a different kind of horror. It was almost like a British Stephen King had wrote the thing. The 2006 remake with Nicolas Cage was what made me know of the original movie. Fans of the original and newbies did not like this one with a passion. I also remember people mocking the movie with stuff about a bear suit and bees. But since it's close to Halloween now, I figured it was time to see this train-wreck...or was it? Could this remake actually be redeeming? Or was it just another dumb idea Hollywood had that could have been much more with more talent behind it? 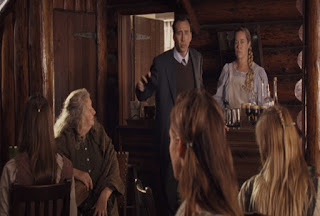 The story is set in the mid-2000's with a police officer named Edward Malus. Even though he works in California, his former love Willow Woodward writes him a letter for help. Her daughter Rowan has been missing from the island of Summersisle for quite some time. The island is very remote and not more than a handful of outsiders really know what it is. Edward catches a plane-ride to the island by chance and arrives there. When he gets there, none of the inhabitants give him much help. Most claim that Rowan Woodward doesn't even exist. While he makes sure they know he is a policeman, they don't take him seriously. Though one lady is smart enough to know that a cop from California has no power in the state of Washington. 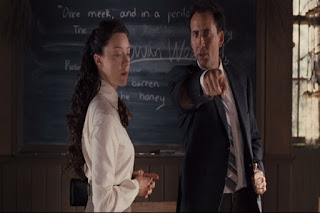 Edward gets even more frustrated when his help finding Rowan keeps getting worse. He knows there is some big mystery and nobody (and I mean nobody) is going to just let him in on it. He even reunites with Willow who is almost helpless herself. The leader of the island is Sister Summersisle whose grandmother founded the commune in the 19th century after fleeing from the Eastern half of America and her ancestors from Europe. Summersisle is an interesting place because there is no law and order. Just a community of people who act like they are living a different century. The only thing that connects them to the outside world is their honey production which was considered a disaster the year prior. But sooner or later Edward is going to learn the truth, and he isn't going to like it. 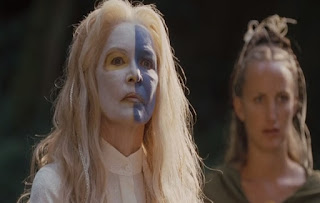 The new Wicker Man is pretty much the joke everyone says it is. It can be a semi-interesting tale at times, but I found it rather boring. I also thought it was weird how the story in this one changed the community where females are not only leaders but they are the dominant gender by far like the Amazonian of legend. Part of the greatness of the original was the clash between the deeply devout Christian in a world of neo-pagans. Religion is rarely made a point here as Edward never really brings it up, and the neo-pagan thing isn't as apparent as early on as it was in the original. I also thought the story was not very believable to be in a 2000's era of modern America than it was in a 1970's Scotland. The movie's only real fans seem to be the ones who like it as an unintentional comedy rather than a horror/drama.

I ADORE the original Wicker Man movie. I never bothered to see this atrocity and never will.

My husband and I watched this movie a few years ago and I'd give it the same rating!

Nick has been known to choose bad movies...