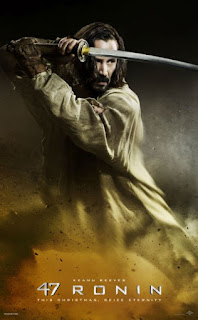 Since I'm familiar with Japanese history, I know more about the forty-seven ronin than most people do. Ronin are master-less samurai and the forty-seven ronin avenged their lord with honor. 47 Ronin isn't the first work based on the tale, but I was interested a little bit. Unlike some films with an almost exclusive Japanese cast, this one is all in English. The "odd one out" is Keanue Reeves who is suppose to be half-Japanese in the film, and he does personally have some Asian ancestry for those who are skeptical but it's not half. I heard critics were not kind to this one and I was expecting something grim and dark. I was surprised at first and not so surprised later on.  Did this one let-down those who love the classic Japanese tale? 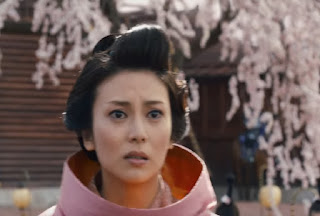 The setting is located in the Ako domain in medieval Japan. The region's lord Naganori Asano finds a young boy that many believe to be a demon. He takes pity on the child, and rescues him from death. He even allows him to live among his people. The boy is named Kai, and is called a half-breed (due to his paternal European descent) by most others. He is befriend by Lord Asano's daughter Mika who over-time starts to love Kai and he loves her back. But since she's a noblewoman, and he's considered less than normal by the general population, their places in society keeps their hearts apart. Due to tragic "bad luck" Lord Asano is killed. A rival, Lord Yoshinaka Kira is believed to be behind his death, but Asano's men can do nothing as the Shogun has told them they cannot take vengeance in any way, shape, or form. But its hard to stop a samurai from bringing honor back to their fallen liege lord. 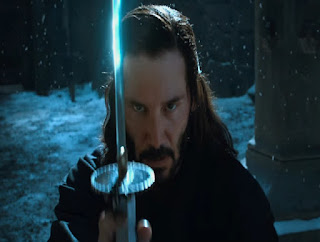 They all become ronin (samurai with no master) and spend the next year waiting. Their leader asks Kai for help in this task. Lord Kira is helped greatly by a witch with heterochromia than can shape-shift from animal to human forms. As a boy, Kai grew up around magicial beings and knows very well of their ways. They only way to fight magic is with magic. So he leads the troops to an area of the forest quite mysterious to normal folks. But in it lies the weapons and tools they will need if they hope to defeat Lord Kira and his forces. They also must hurry as Lord Kira will marry Lady Mika against her wishes so he can claim both lands for himself. But outnumbered and out-matched, will they stand a chance? 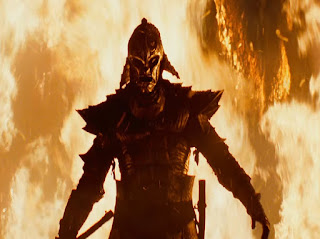 At first I was shocked by how good they movie was. The production was top-notch, I cared for the characters, and it didn't seem to be as "silly" as I had pictured. Then magic comes into the story and it loses all seriousness there. From a basic plot point, besides Kai and the magic the story is about the same as the original tale. But they really should have stuck with it and they would have gotten better results. They movie did pretty bad with critics and normal folks, but I think the first half redeems it enough for me to have liked it but just barely. I hope the next time Hollywood takes on a Japanese tale, they'll do a better job.

Don't seem to be very interested in Asian films for some reason.

I agree with your B- rating.

I wanted to see this one when it first came out but I didn't get around to it. I probably won't rush to watch it now. Thanks for your review!

Hmmmm... I don't know just how close to the historical facts even without the magic this is, Adam... at least from what my mother has told me and I've read.

You know, I liked this movie till the very end! I'm a huge Keanu fan, and I do agree that the production was good, and I liked the actors, but really....that ending....:'(