Donald Trump Wants to Punish Those Who Disrespect the Flag 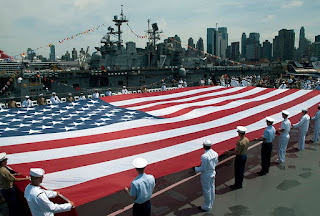 While the vast majority of Americans would never burn, spit-on, etc on the American flag, it's still freedom of speech. There have been supreme court rulings affirming this right. The U.S. government technically doesn't even own the flags these people are doing whatever to. You should be able to do anything you want to your own stuff as long as it doesn't potentially harm you or others. Trump wants these people thrown in jail and/or loss of citizenship. For the Republican Party, who has always preached against the threat of "Big Government" never seems to have a problem implementing fascism when they get power. It may be in bad taste, but it is and should remain legal. Who knows what civil liberties may be next?
Posted by Adam at 11:00 PM

While legal, anyone who stomps, burns, or spits on the flag is a complete douche bag. Should it be a jailable offense? No. But I would turn a blind eye if someone gave that person a nice little throat punch.

And hasn't this issue just come out of nowhere? Why is Trump focusing on this now -- what is he trying to misdirect people's attention away from?

Trump needs to go take an 8th grade civics class. Also I'm convinced these outrageous tweets of his are all done to deflect and divert attention from larger issues such as his many conflicts of interest. Too bad the media is falling for it.

What ever happened to private ownership in this country? If I want to burn my Chinese-made flag (which I don't) it's my right to do so and protected under the First Amendment. Trump doesn't understand the laws of our country.

I get the uncomfortable feeling that this is a red herring. Keep the people distracted...

I don't really approve of flag burning, even if I have been on many occasions tempted to burn flags of other countries, but I would NEVER
burn or defile the Australian flag even with that bloody Union Jack in the corner. Nor would I be like the sporting hooligans and drape my flag over my shoulders and run around like a "demented house rat or some such obnoxious animal".

Trump better get rid of his Twittering......... he is becoming a source of embarrassment for normal citizens of the USA.
His prospective cabinet gets more bizarre by the day..... the cabinet
of BILLIONAIRES!!! Really do these people worry about the "Rust States" which voted them in?????
Scary, scary and shitty scary....... some people will be able to fill up their garden wheelbarrows with all the shit flowing out of the Trump building, now wouldn't that be something to view on a certain blog!!!
I have a strange feeling that Trump JUST could have been a graduate of that illustrious University of Springfield, Missouri???
Colin

Everytime I hear Trump's name of TV, it makes my stomach turn.