Fact of the Day: Catherine of Valois 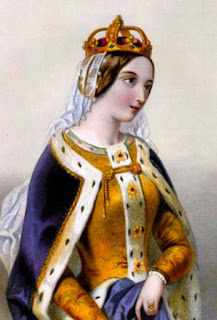 The daughter of Charles VI of France, Catherine of Valois became Queen of England as consort to King Henry V. She gave birth to their son King Henry VI who was disposed in the Wars of the Roses by the House of York. Catherine was widowed and married a nobleman named Owen Tudor. Their grandson Henry Tudor took the throne as Henry VII when his forces overthrew the House of York at the end of the Wars of the Roses.
Posted by Adam at 12:00 AM

Neither did I. But Henry vIi. Beat Ricard iii at the Battle of Bosworth near here.

Game of thrones there