Fact of the Day: End of the Incas 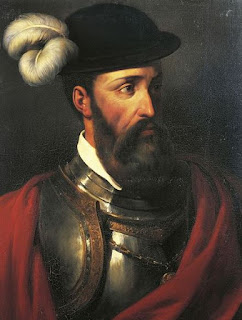 The Inca Empire was officially ended by the conquest led by conquistador Francisco Pizarro. On a military note, Pizarro was considered better than Hernan Cortes as he was often out-numbered and was far away from Spanish posts that could give his men supplies. They captured Emperor Atahualpa and eventually executed him. A good majority of local people were forced into serfdom for the Spanish elite (as the land had be claimed for Spain) and their religion was replaced by Christianity.
Posted by Adam at 12:00 AM

Email ThisBlogThis!Share to TwitterShare to FacebookShare to Pinterest
Labels: Christianity, fact of the day, Peru, Spain

If they don't want to believe, make em, seems to be the way of most surviving religions.

History teaches us a lot.

That sucks for them.

The locals had no immunity from Spanish diseases like small pox. That killed more locals than military battles.

Western Europe's conquests had devastating results for a lot of people around the world.