Fact of the Day: Goats and Curses 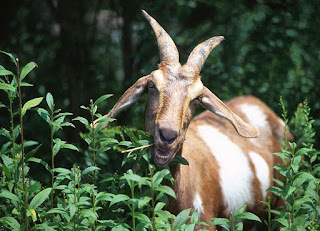 The Chicago Cubs were well-known for going through a 70+year drought of going to the World Series. Most blamed a "curse" set by a man named Billy Sianis who was kicked out for bringing in his goat. Funny enough when the Cubs won the pennant (which guaranteed them a spot in the World Series) in 2016 it was on the exact same day Sianis had died 46 years prior.
Posted by Adam at 12:00 AM

Email ThisBlogThis!Share to TwitterShare to FacebookShare to Pinterest
Labels: Baseball, fact of the day, Illinois

lol connections there if you look, even if it is all hocus pocus

Well, that must have fed superstitions!

That is interesting. I always go to the Billy Goat Tavern whenever I'm in Chicago, so I knew about the curse.

cute capture. i knew about the drought but not the facts surrounding it!!!