Fact of the Day: Handicapped Germany 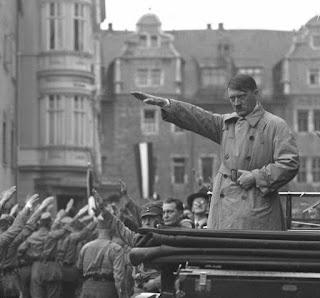 One of the Holocaust's lesser known group of victims were people that were either mentally or physically handicapped. Anyone that was deemed "incurable" were not considered to be of any value to society. Since any of these people could come from any social class and ethnic group, Germans had protested the mass killings arguably more than any other group. Leading the Aktion T4 program to be more secretive (or just swept under the rug) than others.
Posted by Adam at 12:00 AM

Email ThisBlogThis!Share to TwitterShare to FacebookShare to Pinterest
Labels: fact of the day, germany

Wow! I'd never heard of this. This is incredible!

My heart just breaks whenever I hear about stories of victims in the past. Especially during Hitler's time. But a good to know fact. I didn't know this before.

What a black, black time in the history of our world.

We learned everything about that in school.

Good I didn't live there and in that time.

Another sad chapter in human history.

The evil of eugenics in action.

I agree with Stephen Hayes, above...such a sad time...Hitler so mean, drug addict and a WANNA BE ruler of the world

Such a sad time in history.

Reminds me of a new member of that CLUB!!!
Colin