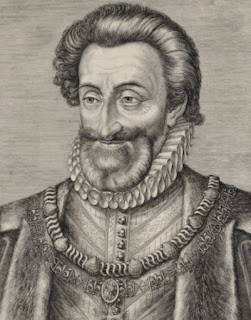 When Henry III of France died, the heir to the throne was his distant cousin Henry of Navarre. This was a problem for powerful Catholics in France as Henry was a Protestant.  They used their power to deny him the crown by trying to give it to the closest living Catholic relative like the the Spanish princess Isabella. However crowning Isabella would put France into a political turmoil, as Salic Law (where the throne could only be inherited through a direct-male line) denied King Edward III of England the throne to France. Making Isabella queen would give any current monarch of England a much stronger claim to the throne. In the end Henry IV became the true king, though a few years into his reign he formally became a Catholic though he most likely was not a true follower. He was considered a traitor to Protestants and wasn't totally trusted by Catholics. His reputation improved greatly after his death.
Posted by Adam at 12:00 AM

Email ThisBlogThis!Share to TwitterShare to FacebookShare to Pinterest
Labels: Catholic, Christianity, fact of the day, france

Religion sure was/is a pain in the arse, as were kings and such though haha

So many religious wars happened in European history.

Religion can be a real pain.

History is so fascinating.