Fact of the Day: Hula Heathens 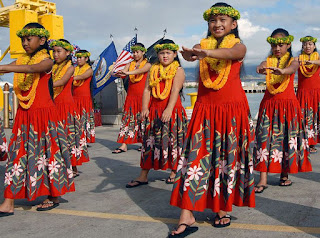 Hula dancing is one of the most iconic things about Hawaii. However it was once abolished by the monarchy. Hawaiian nobility and royalty had mostly converted to Christianity after diplomacy with Western nations. They were urged to get rid of hula dancing as Western Christians saw it as too pagan and for heathens. Before the Hawaiian monarchy was abolished, hula dancing was revived along with other things from traditional Hawaiian culture.
Posted by Adam at 12:00 AM

Email ThisBlogThis!Share to TwitterShare to FacebookShare to Pinterest
Labels: Christianity, fact of the day, hawaii

I can't imagine Hawaii without the hula dance!

Shaking your hips is too Pagan? Wow, who knew?

I think they do a great job when I see them dancing on tv. Who knew.

I think the Hula dance is very pretty. And I THINK all the movements mean something and tell a story.

reminds me of lilo

I didn't know that. Very interesting.

I'm glad it was reinstated as it's a beautiful dance.