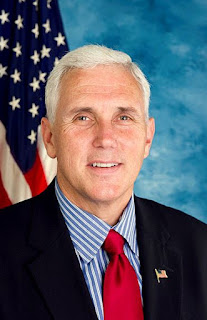 Mike Pence has been successfully elected to the Vice Presidency, and Governor of Indiana however he failed on his first two tries at congress. He ran in 1988, and ran again in 1990 quitting his job the 2nd time around. Having no source of income, Pence used campaign contributions to take care of his mortgage, get groceries, play golf, get his wife a car, and other things. While this technically wasn't illegal at the time, it was one of the reasons why he lost the election in 1990.
Posted by Adam at 12:00 AM

Interesting to read that and know...as we don't always get the personal bits.

Classic politician for you

He's a religious Nazi who would erode our separation of church and state if given a chance.

Another who won't be welcome outside the USA.
I wouldn't trust him with a rusty nail.
Trump has got HIS wall, he will not be invited to
visit any of what were TRUE Allies of the USA.
Who could afford the riots?????????????????
Colin