Fact of the Day: Voyager 1 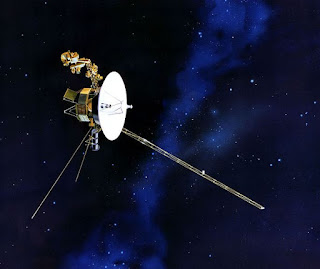 Voyager 1's main mission was to flyby Saturn in 1980, but the Voyager 1 is still sending information to NASA almost forty years after being launched. It's currently the farthest man-made object from Earth, finally leaving the outer Solar System in 2012. The Voyager 1 won't be working forever as by 2025, it will no longer have enough power from its generators to run its scientific instruments.
Posted by Adam at 9:57 AM

Email ThisBlogThis!Share to TwitterShare to FacebookShare to Pinterest
Labels: fact of the day, NASA

We got our money's worth.

I remember reading that it had finally left our solar system. Amazing.