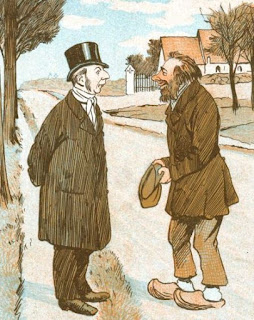 While he doesn't look like it but actor Russell Brand is smarter than he looks. One thing that concerns about this country is there is large group of individuals who think the ultra-rich are truly benevolent and that poor people are only poor because they're lazy. I learned at a young age that a majority of the men at the top really don't care about the people at the bottom. And they will often cut their salaries and benefits so they can have a bigger bonus. So what happens when the few good rich guys talk about treating workers better and increasing taxes? Right-wingers downplay their remarks and call them hypocrites. I remember someone saying that Warren Buffet can't talk because his personal secretary only makes something like 70k a year. That's surely enough for anyone and I'd rather support companies that make sure their workers can feed their families, and take care of their bills. Most CEOs and the people at the top make a ludicrous amount even when they are awful at their jobs and get fired like Carly Fiorina (HP) and Ron Johnson (JCPenney).
Posted by Adam at 12:00 PM

That Brand quote is fantastic.

I haven't seen much of a correlation between wealth and intelligence nor between wealth and decency. There are a few people who honestly have some sort of disability who are not high earners (or earners at all) because of it, but they're in a special category.

I'm looking at some headlines today and I'm worried that most of us are in for rough times.

CEOs make huge salaries but when these guys get into legal trouble they're never held accountable.

wasn't he married to Katy Perry at one point? Smart man, true quote.

He was, that marriage folded very quickly. I hear Perry blamed it on not wanting kids when he wanted them. Couples should really talk about that kind of stuff before marriage. Saves a lot of headache