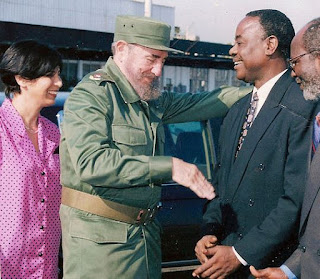 One of the last key figures of the Cold War, Cuban leader Fidel Castro has died. While he has been out of power for a few years (due to poor health, and his brother ruled in his place) not many think of Cuba without thinking of Castro. While many Americans grew to hate him, I never took the man very seriously. I was born right before the Cold War ended and his power and influence was that of a mouse once he lost the lion (Soviet Union) that had protected and aided him since his start. It was pretty obvious that any war he could start with the United States would result in his defeat from the 1990's onward. I really do hope that we will soon open our trade again with Cuba, and many Americans do not realize that we are forbidden to enter Cuba due to a ridiculous trade embargo.
Posted by Adam at 1:00 PM

He was a giant man, Fidel Castro RIP.

I have mixed feelings about him. To some extent, he represents to me the idea that people's revolutions are more often than not better in theory than in execution.

Whatever anyone else thinks of him, the Cuban people loved him. Well, except for those who didn't and fled to the US, of course.

Of course Trump has said he'll do away with all the progress we've made towards Cuba, but with many American businesses doing business there now it will be hard turning back the hands of the clock.