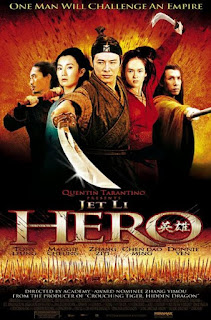 Even though it was filmed in China and spoken in Mandarin Chinese, I do somewhat remember Hero when it came out. Well when it came out in the United States anyway. It took until 2004 for it to reach the United States of America, and that was only because film director Quentin Tarantino took special interest and helped out. I assume Jet Li is a huge star in China, but his career in America has been fairly notable as well. I never did see the film until recently, but I remember the trailer had some pretty crazy moves going about. Critics back in the early 2000's seemed to just love this movie too. It was (at the time) the most expensive movie originating in China, but it did really well at Chinese movie theaters. So was it as good as I had hoped? 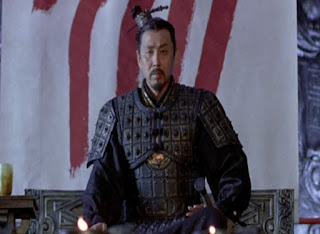 The film is set 227 BC during the Warring States period in what would eventually become modern-day China. The Warring States period was a conflict between several kingdoms in China but the most dominant was the Qin Kingdom. The King of Qin is very paranoid and always wears his armor incase someone tries to assassinate him. His royal place is nearly empty (no places for skilled warriors to hide) and he never lets anyone near him for about a 100 paces. He almost was killed by skilled assassins not long ago but his life was spared by luck as it would seem. The King of Qin is quite interested in a local prefect (police officer) who is suppose to have the ultimate level of skill with his sword and he invites him as a royal guest. 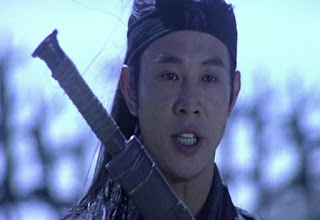 His name is...Nameless as he was orphaned at an early age. The only real reason that he was invited by his king was the fact that he killed 3 skilled assassins that were after the King of Qin's head. The first was Long Sky who is a fearsome spear-man. The other two were a romantically-involved couple known as Broken Sword and Flying Snow. For his success (as he has their weapons as a way to prove their demises) he is promised more power and many riches. However the King of Qin demands to know exactly how they were killed in battle and why. But things are never quite the way you hear them as how they really happened. 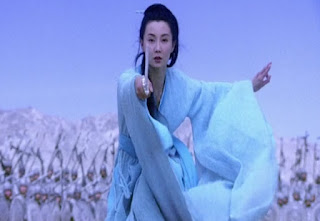 At first I thought Hero was really over-rated as the story started to bore me and the action scenes were too "fake" to me. Like I hear most movie/tv swords are made of some type of rubber and they don't even tried to hide that. And the only thing red you'll see is garments of clothing. But half-way through it got a lot better, but nothing quite like what I expected. I would even say the story doesn't quite make sense once you know the "whole" story. Even though it's been many years since it came out, the use of colors and the "dances" are very artistic and beautiful today. It's a good film but certainly not the best foreign-language movie I've ever watched. I'm a little surprised Quentin Taratino liked it that much, I thought his Kill Bill movies (which came out shortly after Hero) were far superior to it.