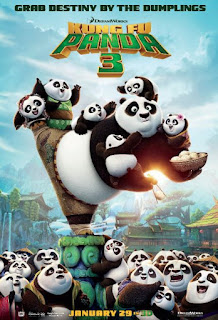 A few years ago, I watched the first two Kung Fu Panda films. While not much has changed, they do take quite some time for a sequel to roll out. The original came out in 2008 which will soon be a decade ago. Now Kung Fu Panda was not my favorite animate movie as it doesn't quite compete with Pixar. But there are cute movies, and the plots are fairly enjoyable. My wife is also a minor fan of the movies, and she was happy to get a chance to see the 3rd movie. The series has come out with some fairly creative stuff, so I was hoping that the newest one would excite us more than wander into the realm of blandness. 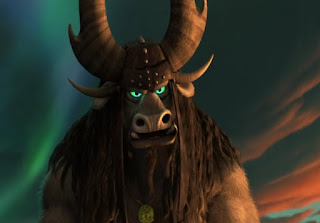 The plot begins sort of before the events of the first movie. Hundreds of years prior, during Grand Master Oogway's early years he was a incredible warrior in China. Leading his armies with him was General Kai, a yak and a fearsome warrior. During a battle, Oogway was injured and Kai carried him until he found a place that could heal him. A large group of panda bears nursed Oogway back to life. However this was no traditional medicine as the pandas used an energy force called chi to magically heal the tortoise's wounds. However Kai became thirsty for the power of the chi and used it for his own greed and desires. Oogway then made the decision to banish Kai to the spirit realm. However now that Oogway was in the after-life, Kai finds him after taking the life-chi of deceased marital arts masters. He defeats Oogway and using all the chi he's stolen, uses this power to create a portal to the mortal realm where he lands right back into China. 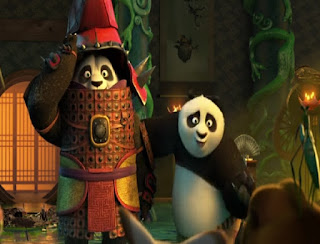 General Kai knows that his main threat to his power are the former students/followers of Grand Master Oogway. Which are Master Shifu, Tigress, Mantis, Crane, Viper, Monkey, and of course Po the Panda. While Po is the Dragon Warrior, he is not used to teaching others how to do kung fu which upsets him. And his comrades lose a lot faith in his abilities as a teacher. But a bright moment happens when his biological father Li Shan arrives after searching years for his long-lost son. Po was thought to be perhaps the last of the pandas, but that was not true. Li Shan is from a village where Panda bears are many and healthy. However will Po, his comrades, the pandas, or even all of  China be safe when General Kai comes for Po's chi? They'll all have to work together to defeat this all-powerful warlord. 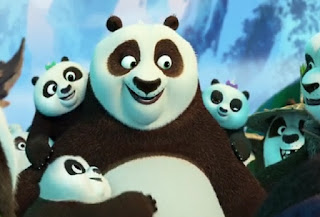 Overall Kung Fun Panda 3 was a little worse than I expected. Like I've said, they were never the greatest films but I enjoyed the first two quite a bit. I did also enjoy this third movie, but not quite as much. I didn't really like the whole panda village and Po reuniting with his dad as I thought I would. The plot is also fairly predictable, so there aren't many moments that just sneak past your expectations. I hear Kung Fu Panda was suppose to a trilogy, and this would have been a decent end to it. Now they are planning three more films from what I hear. I just hope they step up their game as I don't know if they can keep the ship afloat if the story starts to make a steep decline whether it's with critics or at the box office.

These movies are usually fun.

These seem to be popular movies!