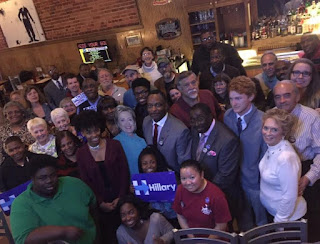 Even though I don't volunteer much of my time anymore, Daisy and I are well-known among the leadership of the local Democratic party. Even though Spartanburg's inner-city is fairly blue, we live in a county with a flood of red-necks who vote against their own interests but not against their own prejudices. We got invited to the party at the Upstairs Bar which is the upper floor of a pizza place in downtown. None of us were really expecting South Carolina to vote Blue that night, but I was disappointed with Ohio and Florida, and really shocked with Pennsylvania and Wisconsin. It seemed that perhaps Clinton's biggest enemy was not Donald Trump, but the Bernie or Bust movement. Most of the swing states were razor-thin wins that could have been won if not for 3rd party votes and stay-at-home "voters". Like how Ralph Nader voters elected George W. Bush in 2000, the Gary Johnson and Jill Stein voters elected Donald Trump. Green party voters say that their ideology is more important, but I'm a realist and they isn't anything dumber than throwing away a vote. I had as many electoral votes as Johnson or Stein that night. Let that sink in.

Hillary Clinton was not the greatest candidate sure (and I honestly expected a defeat in 2020) but the electoral college (as Clinton nabbed the popular vote) elected a national embarrassment to be our next president. I'm utterly ashamed that Donald Trump has shown to the children of today that a man like him can achieve the nation's highest office and his smug face will be in the history books. A lot of Republicans are crying out saying we should give him a chance. Once he stops being a racist bigoted idiot who wants to put fascists and lunatics in his cabinet, then we might be able to show him some respect. Because honestly, he hasn't shown anybody else much respect. It's a two-way street and I didn't see any of them giving Obama a fair chance either.
Posted by Adam at 5:00 PM

Hear hear! Completely agree with everything you wrote. As a Canadian, we do feel heavily vested on the future of America, and the news of DT winning was devastating to most of us here:( This election was a sad day in history.

I can't disagree with anything you've written.

Voter suppression in Wisconsin sunk Clinton there; thousands of voters in Democratic areas of the state were turned away. Michigan could have been held if she'd campaigned more there. Pennslyvania was a shock, though.

While I agree that the presence of third-party voters had an effect on Clinton, that doesn't mean they should receive the majority of the blame for Trump. In the end, those who voted for Trump are the most responsible for putting him there.

It is a sad situation.

I agree with everything you said in this post. I was devastated by the results of the election. My area of north Florida always votes blue, but all of the surrounding counties are very red. I will never understand why these people vote against their own best interests. I am also sick of the hypocrisy they show when they say we need to give this disgusting man a chance, especially after the shameful way they have treated President Obama for the last 8 years.