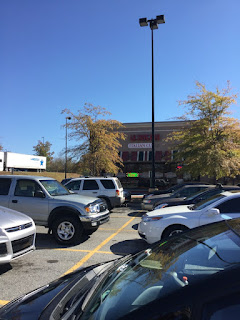 La Taverna is a small Italian restaurant in my city of Spartanburg, South Carolina. I don't know almost any Italian but from I could research La Taverna means "The Tavern" in English. I have a co-worker who is from New York/New Jersey and we were talking about pizza. I asked him what restaurant was closest to real New York pizza and he said this place was. I had sort of remembered the restaurant as it's right next to our local Shoe Carnival. Daisy had initially wanted to go to some little hog dog place she heard about, but it was pretty easy to convince her to go here instead. 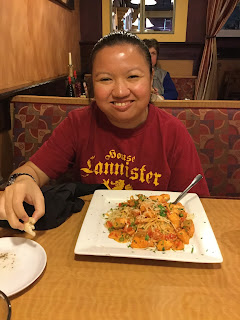 The place is fairly small as it's roughly half the size of any restaurant I've been to. They are one of the places that close on Mondays. We noticed two waiters there and that's honestly all they needed for the scope of the place.Since I'm a vegetarian, Daisy never really gets to go to a sea-food-only place as I can't eat almost anything there. So she was delighted to see that they served sea-food. She chose Al Salmone which is basically salmon with some type of pasta. You get the choice of what type of pasta which Daisy chose as regular Spaghetti. One of the fanciest looking meals I've ever seen Daisy get during our time together. 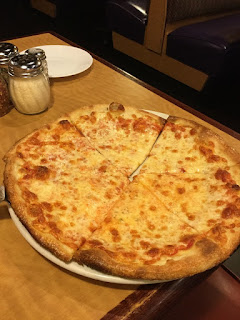 As a pizza connoisseur, this is what i was looking forward to. While hot, it's a pretty good pizza, but as the pizza loses its heat it does get a little bland. The dough is made pretty well, but I'm not a huge fan of thin pizzas nor do I love pizzas that have very light sauces on them. The pizza was a tiny bit burned on the bottom which is a pet peeve I have with pizzas. It was very close to Sbarro's pizza at the mall, but I think Sbarro makes the better pizza. I always think pizza-centered places always make the best ones, but for a restaurant that serves anything Italian their pizza is way better than the other places I've been to where the pizza is an after-thought. I can't say when we'll be back, but I wouldn't mind another meal or two there.
Posted by Adam at 3:00 PM

Well, that pizza in the pic looks yummy:D I like thin-crust pizzas, but am not a big pizza fan in general though.

Elvis would've eaten 10 of those in a day.

The pizza looks really good! I love Sbarro pizza too. Their spaghetti and meatballs is good too.

The pizza does look good. I enjoy trying different ones in different places.

I hate it when the bottom gets burnt too. Ruins the whole flavor! Myself, I prefer deep dish Chicago Style over those thin NY Style pizzas any day.

My favorite pizza place is the Chicago Brewery in the Four Queens on Fremont Street in Las Vegas. It's awesome! Thanks for your great review!

I love pizza...a friend made homemade pizzas last Sunday and they were over the moon good....
I laughed out loud when I read your comment on "the closest thing to a bakery at my house is muffin mix and milk" haa....i love your sense of humor.