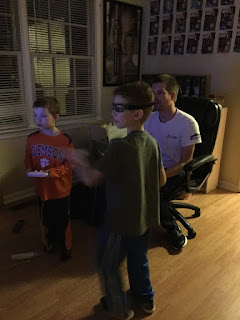 I had brought my WiiU and a little TV over my brother's house during the Thanksgiving event. Mainly because I knew my nephew Mr. C and Mr. K would be there. Mr. C finished his food first and he went to have fun in my niece's room. I told him to come over to the office and to my shock that he never heard of the game Super Smash Bros. before. Both of them were really bad at it, so I had to lose on purpose at times to make sure neither of them threw a tantrum, I make it where I won, then Mr. K, then Mr. C and the circle continued. By the end of the night they got much better, but they were upset that they had to go home. "One more game?" was uttered to their parents by both of them. My brother Steven asked what it was called, seems Santa is going to get them it on Christmas morning.
Posted by Adam at 4:00 PM

Good for you, glad they liked it!

haha, thanks to you!

Makes it an easy decision for Santa.

Hehehe this is so cute!

Good on you for introducing them to a great game! Hehe...did you get your hands on the Nintendo NES Classic? Freaking thing is still sold out everywhere here!

Santa will be getting a tip :)

They look the age to really enjoy this.
I'm sure Santa will be getting a big hint!