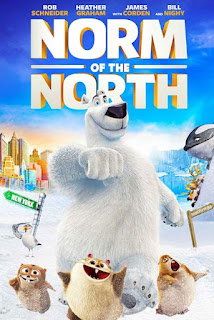 Norm of the North came out at the start of the year, and I never really noticed until it a few months later. Until the other day, I had no idea what it was even about except the polar bear thing. My wife Daisy loves polar bears, and I saw that our local library had one to lend. I would have never (not even for a second) thought about seeing this one in theaters but I figured why not now? Well against my better judgement, I might should have listened to the critics. Because this one did abysmal with them. Not the worst film of 2016 "bad" mind you, but still not very respectable either. So where did this one go wrong? 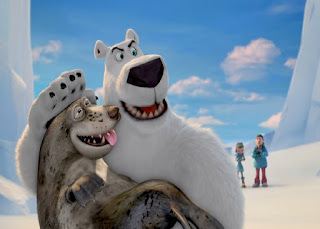 Norm of the North is about a young polar bear named...Norm. However he's far from normal. Instead of hunting seals, he falls for their sad faces and ends up treating them like one would treat a stray dog or cat. All the other creatures in the arctic often just laugh right at him. The one unique thing about Norm is that he can speak "human" while most other polar bears cannot. His grandfather (who was the King of the Arctic) also shared this talent, but he went missing awhile back. Norm one day sees humans do far more to his home than they've ever done. And that's dropping a well-built house onto the thick ice sheets. 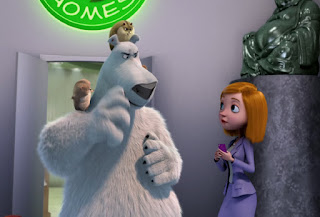 A company wants to build a little city of houses and whatnot in his home. He could tolerate a few houses but not a whole civilization. So Norm the polar bear takes a ride to New York City to straighten things out. He is found by Vera Brightly who runs the publicity for the company and thinks Norm is perfect to be the mascot for it. Norm obviously don't want that, but he wants to try to undermine them. Especially as its CEO Mr. Greene is as corrupt as they come. But can one polar bear and his lemming friends (literally) possibly make a difference? Or will humans find yet another piece of nature to demolish? 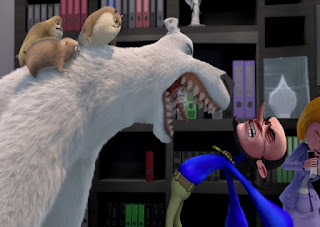 So yeah, Norm of the North is pretty bad. It's not atrocious but it's far from perfection too. Humans building homes in the arctic is a really dumb idea to begin with. And none of the characters really are very likable and even Norm has trouble preventing an audience from getting bored. This one reminds me of a cartoon as a kid you didn't like, on an episode that was really bad, but somehow took an hour and half to finish. It did poorly at theaters but there is a rumor that it could have sequels...but only on TV. While Pixar has set the bar high for animated films, Lionsgate has to do a heck of a lot better if they ever hope to compete with the heavy-weights.

I haven´t watch this film yet. Sounds interesting

You watch waaaaaaay more movies than I do.

Man, I wanted to see this one. Guess I won't waste my time now!