Painting The Walls in My Garage 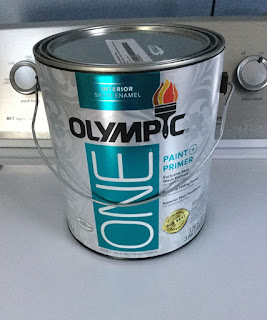 As most home-owners, painting is a reality for us. I've been meaning to the paint the garage, but things kept making me delay it. I chose Olympic One as my paint as it's rather inexpensive but coverage and durability are still fairly excellent. My wife Daisy wanted the garage "white" but I wanted it an official white that we could get again if we ever ran out of paint and needed to touch it up. We chose Frostine (AF-5) by Benjamin Moore, and had it color-matched into Olympic One paint. It's just a tad under a super-white, so it's not a real off-white. It's suppose to have a blue-green tone to it, but it's so faint that it doesn't look much different than just a regular white. The garage was in rather rough shape, so while most garage walls are either flat or egg-shell I wanted satin instead as it's far more durable than the other sheens. 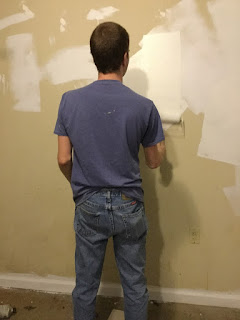 The garage walls had obviously never been painted before, and when I painted the ceiling with Valspar Reserve white I rolled a little on the walls. Mainly to cover over holes that I had put spackle on. Olympic One is a paint+primer but that's more or less a gimmick companies use to describe better quality paints with better coverage and better bonds. I had thought about using a traditional primer first as a unpainted surface can just soak a paint in as it's often porous, but a decent coat on the first wall made me go along with just using the paint instead. It seemed to be fairly uniform between the spackle, previous paint-spots, and bare wall. 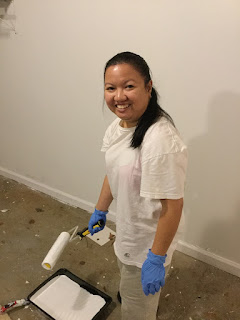 At the end of the first day, as soon as I went outside to hose off my supplies to be cleaned, my wife Daisy walks out to paint as I told her I'd start earlier than she would. I got one decent coat on the wall, but I let her do the majority of the 2nd coat on the walls. While she did that, I took a paint brush and started painting the edges and small areas that I missed on the first go-around. This is why I would never consider painting as a professional, as it's easy to miss things on your first coat. This was Daisy's first real try at painting, and she did better than I expected. She went through maybe a quart of paint before she got tired and went back inside. I called it a day soon afterwards. 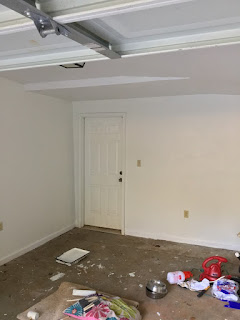 But now it looks a heck of a lot better than it did before. The hardest part is the floor which is un-coated and the previous owners let it get quite hard to clean. I have some junk lying around but that'll be the only easy part as it's just moving it out of the way.
Posted by Adam at 5:30 PM

Good to see the two of you painting and what you have done looks good.

So nice to do this together ...
It's looking good!

You don't buy a house; the house buys YOU!

wow the garage is going to look so good when it's done, good for you guys!

Painting is a job I used to dislike.

Of all the chores, painting is my favorite.
Apparently, drinking beer while watching TV is not a chore.

Oh yes... I'm very familiar with what you went through. I keep wishing I don't have to look at another paint brush, but that never happens. We've got another project right now. Sigh...

It looks terrific! I love an organized and clean garage. And even though I buy paints that include primer, I always add 'real' primer first whether I need to or not. I just feel like it gives me better results.

It looks great, Adam and Daisy...concrete stain (not paint) may make your floor look a lot better.....