Question: Should We Abolish The Electoral College? 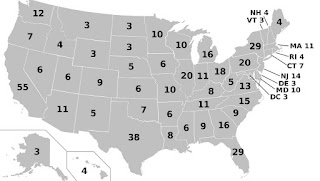 In America, the President is literally elected by the electoral college not the people. Electors almost always vote with the state, but there have been a few cases where a "faithless elector" will give a vote away to another candidate even a 3rd party one. But I think it should be abolished. In modern history Hillary Clinton, and Al Gore both carried the popular vote but not the electoral in the 2016 and 2000 elections. While both races were too close to call on the start of election night, the plain fact is that more people wanted them to be president and isn't that one of the most basic parts of democracy? You could say it was bound to happen but it should be once in a century, not twice in not even two decades.

But the winner-take-all system is flawed because it demotivates others to go out and vote. In a red-state like South Carolina, my vote literally does not matter and I'm sure many southern liberals stay at home because what's the point? Which makes us look weaker politically. Same goes for Republicans in states like New York and California. And candidates ignore every state that isn't a swing state after the primaries are over. Florida, and Ohio should not sway every election. And some states are not given the true value to their "votes". California has roughly 8 times as many people as there are in South Carolina, however only has about six times as many votes. Who's getting the bad part of that deal?

Every vote should matter, simple as that. I had once thought that the electoral college had to be abolished through a constitutional amendment, but from what I read congressional approval is all that's needed though I could be wrong. While it's more "fun" to watch the state counts on the news, I preferred to have every vote matter because states aren't people. Some say it's because it helps from making sure bigger cities don't over-rule counties, but that happens all the time in the electoral process. If everyone votes and their votes are counted, where's the problem? Trump will be the next president, we can't debate that. However we don't want this kind of thing to happen again. If it happened to Trump in 2020, they'd cry foul too. Let's make this an even playing field.

Is it time to toss out the electoral college?
Posted by Adam at 12:00 PM

No voting system is perfect. The electoral college is just quirky

we have to recover from this outcome

Yes; it's time for the electoral college to go.

Something has to change - and FAST.
But don't expect any move by the lunatic Red head (with
apologies to all normal red heads).
You won't get any comments from your Looney Trump lovers, Adam.
I just hope that they boil in the stew they have given the world.
Colin

Sounds so complicated. Every vote should matter.

I agree with you on this issue.

I am an Indian and neither me nor any of my friends or relatives are able to understand how the American President is elected.

I am sure lots of people around the world will be relieved if and when this confusing system is abolished in favour of something else.

We're a republic, not a democracy. I prefer Canada's system, except for the fact that it has too many parties. I think the electoral college should go; each vote should be equal in value. Whatever happens going forward in the next few months, I think it will be fascinating.