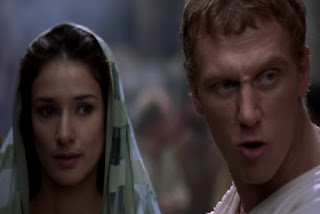 Rome came out in the mid-2000's for HBO in America though other networks helped support the show outside of America as it was quite expensive to make. I wasn't quite sure if I ever heard of Rome until not long ago. Having HBO with my mother running the household was like having caviar at my house, it wasn't going to happen. And since many others (especially back then) don't get HBO, word-of-mouth wasn't as wide-spread as it could have been. Many call it Game of Thrones before Game of Thrones. I was curious if they had characters that were all original but lived during the days of the Roman Empire. Except that's not really true to what I might have been thinking. It's set before the end of the Roman Republic. I was also glad to see some actors that were later on Game of Thrones. Like Ciaran Hinds (Julius Caesar) later starred as the King-Beyond-the-Wall Mance Rayder, Indira Varma (Niobe) became Ellaria Sand, and Tobias Menzies (Marcus Brutus) played the Stark children's maternal uncle Edmure Tulley. 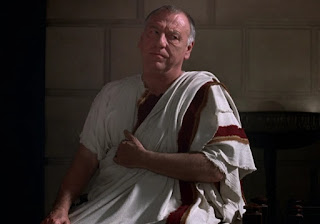 The story begins as Julius Caesar has just conquered Gaul (mostly present-day France) and his friend Pompey Magnus has informed him that Pompey's wife (Caesar's daughter Julia) has died in childbirth and there was no surviving child. While Caesar and Pompey had been close friends for many years, Roman politics are vicious. Pompey's no longer being married to Julia has eroded a strong alliance to the point where there is not much trust between the two men. He eventually allies with the traditionalist wing of the Roman Senate, who fear Caesar and think he wants to be King of the Roman Republic. The two old friends spark a civil war. Pompey has more men and uses politics and his power to defend himself from Caesar invading Rome. However Caesar's men are more loyal and fiercer warriors on average. When the Roman Senate condemns Caesar as a not-so-common criminal, the legendary general Julius Caesar has no choice to but to take his men of the 13th Legion and take back his rightful spot in Rome. 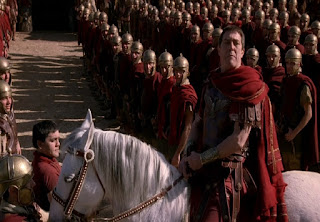 But not all those in Rome are Caesar's enemies. The common people adore Caesar for the most part as he's sympathetic to their struggles instead of giving the privileged more privileges like the traditionalists of the Roman Senate. His niece Atia has quite some power in the social circle of the aristocracy and she's grooming her young son Octavian to be quite the man in the future of Rome. While not his wife, perhaps the biggest love of his life Servilia also holds similar influence as Atia, and she's the mother of Marcus Brutus a notable Roman politician. Caesar's not so famous friends are two soldiers named Titus Pullo and Lucius Vorenus who are quite different from each other but Caesar believes they are bless by the gods. As they come back from tasks and missions that should have killed them but yet they escaped fate. 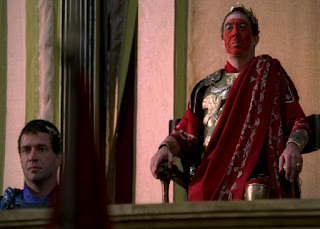 Someone had argued that Rome was better than Game of Thrones to me, and while I haven't finished the series I want to say that's not true. The two shows have a lot in common, but the story is something (as a lover of history) that I knew. I don't think there is a person alive who doesn't know that Julius Caesar gets assassinated in the Roman Senate, but very few people expected deaths in Game of Thrones (or the books) like Ned Stark, Khal Drogo, and Jon Snow. The plot is predictable except for Titus Pullo, Lucius Vorenus and their loved ones. It's extremely well-done so I'll give it that, and I can see why the show was so utterly expensive. Even though it's not fairly long compared to other TV shows, I think could have easily done the same story in half the time. Which could have saved them a lot in the long-run, including the show as the expense made the popular show end by its second season from what I hear.

Hi, Adam! Sorry I couldn't get here until now ~ using the library for internet access hasn't worked as well as I hoped. I loved the HBO series "Rome." Someone gave us the series as a Christmas gift. I was so disappointed that it only went through two seasons, because I thought it was great! Thanks for reviewing it! Have a good one!

I usually watch anything having to do with Rome but I missed this one.