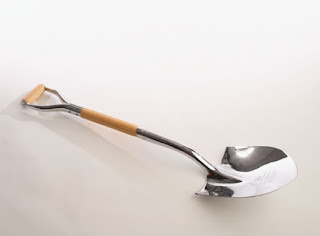 When my dog Zelda died in October we knew we had to put her down. The day before she died, I went to my mother's house (where she spent the vast-majority of her life) and started digging. I told my mother to start a hole so I'd know where she wanted it to be. The ground was so dry that it was almost impossible to dig through more than a few inches. We had to get a garden hose and soak the ground. This made it way easier and after about an a hour I dug a fairly decent sized plot. When they put her down, they put her in a casket-shaped box which I was thankful for as my previous dog Chip had been put in a small-luggage shaped bag of black plastic back in the early 2000's. The box added some more mass so we had to readjust the hole a bit. After dumping the dirt on her remains, I said a few words to say goodbye. I knew this reality would one day come since she was a puppy, but she was my baby and it was difficult.
Posted by Adam at 12:00 PM

That's very thoughtful of them to give her a coffin. My childhood dogs lived up to the ages of 13 & 15 so I'm all too familiar with that heartbreaking feeling.

It's sad losing a pet, but it sounds like you gave her a great send off.

That's good to know at least that she was buried where she was loved the most.

Aww Adam, so sorry for your loss.

I'm sorry Zelda died, Adam. It's never fun having to bury a pet or a person. Thanks for sharing.

It's always very sad to lose a much loved pet.
But comforting that you could bury her in her favourite place.

So sorry for your loss. It's never easy to lose a pet :(

Adam, I'm sorry. It hurts like losing a family member.

I am so sorry for your loss, Adam. Sending you a hug.