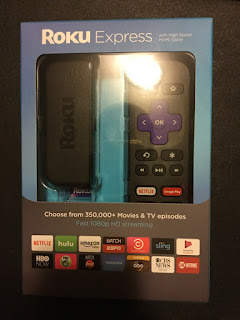 While I have gaming consoles that do pretty much the same thing, my mom let us borrow her Roku 3 and we liked it a lot. While I've never seen the inside of them, Roku players don't seem to have moving-parts (like a tablet) so unlike my gaming consoles (which have powerful processors and fans) Rokus seem to generate far less power which is good for my power bill and the environment. My mother wanted her Roku back so we got this new one that's an very economical version. The remote is not as nicely made, and the Roku main unit is a lot smaller. They suggest you use the sticky-tape it comes with to adhere it to the bottom of your TV but I just have it resting on the stand where the old one was. Everything is still in HD which will last me until I finally get one of those 4K TVs in a few years.
Posted by Adam at 12:00 PM

not being a gamer, it's hard to keep up with the latest gaming consoles, but we do have a Roku box we used to stream Netflix. But my husband says we can get streaming from the service providers now.