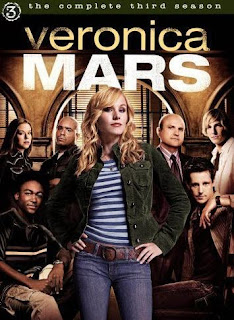 Veronica Mars is a rather old show now, but it was one of the biggest starts for Kristen Bell. Though she played the teenage Veronica Mars ten years ago, she's now 36 and playing characters that are far older. I remember watching it with Daisy back in 2010-2011 but we never really saw the whole thing just bits and pieces. She wanted to see the major movie they made back in 2014, and made sure we didn't miss a single episode. It started as UPN show and stayed on as the network merged with The WB to make The CW. Like most shows I've noticed from The CW, there are many episodes all about an 40 something minutes each. We started back in August, but watched it on and off again until November. 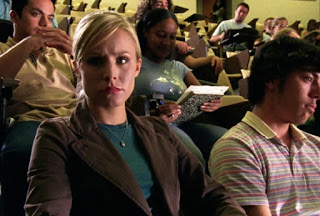 Unlike the two previous seasons, Veronica Mars is now in college instead of being a student at Neptune High School. She experiences similar things as Hearst College, like alienation from her class-mates and pleas for help from those who know of her detective skills. She does extremely well in her criminology class where her professor Hank Landry believes she is a student that a teacher only sees once in a life-time. His teacher's-aide Tim Foyle thinks she is a wannabe and doesn't deserve the half the respect that she gets from Hank Landry. She also doesn't make very good friends with the Dean of the college, Cyrus O'Dell. When near-chaos starts to ensue at Hearst she is urged by the Dean to turn in students she knows did wrong. But Veronica thinks that is not very moral and out of her character. 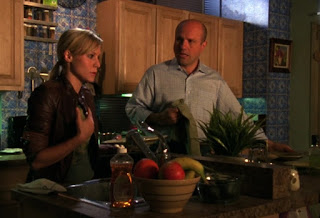 Hearst College's biggest issue isn't the Dean, the students, or the teachers but rather a person who's taken advantage of drunk college girls and shaving their heads to shame them even more afterwards. Nobody for sure knows who is the evil guy doing it. Veronica is rather stumped as well as she believes he originates in the rowdy fraternities at the campus. Many of the female victims and their supporters want the fraternities closed down for good. Which causes a civil war of sorts at the college. But Veronica often attends the drunken parties in hopes of catching him red handed. But if she fails, then many of her female peer's lives could be ruined. Will she be able to solve this mystery? Or will she finally meet the challenge she could never finish?

Veronica Mars' third season was its last, and I can see why. The previous two focused on one big mystery but this one gets solved rather quickly. It's rather a bunch of mysteries, none of which are really that interesting. It has its high and low points, but I will say for a show that was struggling to get viewers from day one they really dropped the ball. I really wanted to say I liked it more than I did, but it often bored me and I got often got tired of the similar plots. Like Veronica's relationship with Logan Echolls, that was never a healthy relationship at any point in this story. But I remain optimistic about the movie. From what I hear there won't be another one, so I hope they gave fans what they wanted with it.

I've never seen this show. Sadly, my tv viewing has gone off the rails because of traveling. Your reviews are always interesting. Have a good one, Adam!

I've watched a few Veronica Mars shows back then but never did see the whole series.

I wanted to watch this one back in the day, but never found time. I do know it has a pretty big cult following, even to this day.