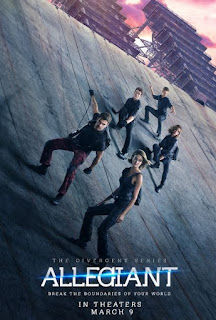 Allegiant is the third movie to the Divergent series. My wife and I started the series not that long ago. She was a big fan of Shailene Woodley on The Secret Life of an American Teenager so I wasn't surprised we started to watch the series based on the popular books. The first movie was good, and I liked the 2nd one better. However I was little frustrated that they were making a two-part movie based on the last book. They tried changing the name of Part 2 to Ascendant and keeping Part 1 as just Allegiant but I think many shared my view. Because this one didn't exactly do "horrible" at the box office but didn't do nearly enough for the studio to release it back in theaters. My wife wanted to see it in theaters but she forgot about it and I didn't really try reminding her. 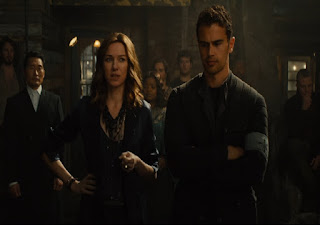 The story takes place not long after the last one with the death of Jeanine Matthews and the fall of her minions that were hunting down divergents and their allies. Tobias "Four" Eaton's mis-trusted and estranged mother Evelyn assumes command over what remains in Chicago. One of the first things that gets done is brutal punishments for Jeanine Matthews' people which pleases many but does upset a notable few. A civil war almost breaks out as Evelyn's view on Chicago is different than others who existed in other factions of the city. However Four and Beatrice Prior don't plan on staying in Chicago for whatever erupts during the conflict. They are really hoping to leave Chicago and discover what really lies on the other side of the giant wall. 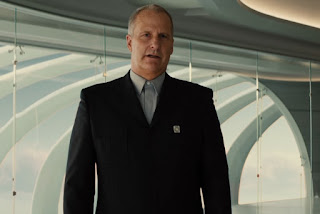 On the other side they don't encounter a horrific wasteland devoid of people like they expected. They almost immediately find an answer to what lies behind the wall. Instead of nothing, there exists a society that's been watching over Chicago as if they were some group of deities. The "invisible" city is actually called the Bureau of Genetic Welfare and Chicago became it's guinea pig of sorts. Factions were their idea, and so were the idea of divergents coming out of the gene pool to show that factions were not needed. The leader of the city is David who knows about Tris all of her life along with everyone notable in Chicago. He mentions Tris' mother and her connection to the city that Tris never even believed existed. David believes Tris is the hope to save mankind, but is David an angel or a devil to Tris? 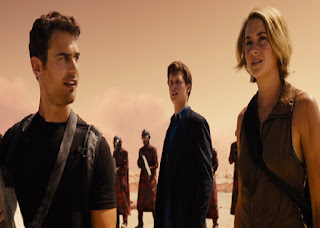 Overall I can still say I liked Allegiant, but not as much as I had with the previous two films. One of the reasons why Divergent has never been close to one of my favorite series is because the story often feels (to me) like it serves very little point long-term even with big bad villains. Luckily the movie doesn't really end on a cliff-hanger and can sort of serve as a "ending" of sorts. I say this because there is talk of the last movie being made just for television. And hear even that may be in limbo. While Harry Potter and The Hunger Games survived with two-part movies, Divergent fell down the stairs big time. I guess Hollywood might think twice about that next time huh? I certainly don't think they are needed unless they can make it feel like a real one-part movie.

I've watched all the movies but I never thought they were all that great.

The third?
They made another after "Divergent?"
Huh. Who knew?

I liked this movie! It was better than the last one.

I've only seen the first one.

I've never seen of these but they look interesting.

I didn't think these were good enough to continue with.