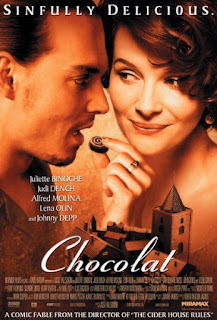 Even though it came out in 2000, I only heard about Chocolat until recently. There doesn't seem to be many movies about candy being central to the plot. The only thing that comes to mind is Willy Wonka and the Chocolate Factory. Besides chocolate, the movie is a romantic-drama and to get the women all excited they cast Johnny Depp as the love-interest. Coincidentally five years later, Johnny Depp himself was Willy Wonka in the 2005 remake of the original movie. I also found out later that the movie Chocolat is based on a novel of the same name from 1999. Considering they had made the movie a year later meant production must of been lightning fast. And it must of worked out because Chocolat was nominated for an Oscar for Best Picture, an honor that films that takes years to finish often never get. 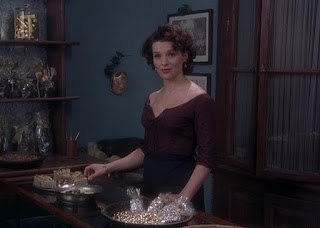 The story is set in France during the year 1959 which was not very long after the end of World War II. As France heals from the horror Germany imposed on it, life goes on for the rest of them. A woman named Vianne Rocher moves in a very small French village. While France has been very well known historically for liberal ideas and revolutionary movenments, this village is almost the exact opposite. Everyone is told how to dress, how to act, where to go, and what to do in many ways, shapes, and forms. Vianne has traveled across Europe, but her trade is chocolate. She opens a little chocolaterie right before the Christian holiday of Lent. The practice of Lent is where people are suppose to be selfless and give up many things they like. Chocolate is among common things given up during the time (forty days) of Lent. 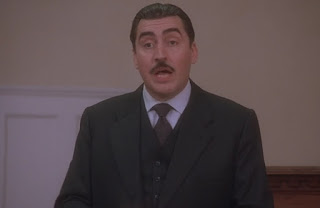 The mayor of the village, Comte de Reynaud notices her moving in and getting settled. He welcomes her to the community, and invites her to the local catholic church which virtually the whole town goes to. Vianne Rocher turns down the invite as she's an atheist, and while irreligion has been strong in France historically, in this Catholic village it doesn't make you very many friends. The mayor also learns that her daughter Anouk was born illegitimate. He at first believes he doesn't have to do much to cast her out of the town. But her excellent skills in making people love chocolate prove to be too strong. So he often plots against her. Using his influence as mayor to speak ill of her to his friends. He also encourages the townspeople to shun the "evils of the world". He even resorts to having the town priest alter his own sermons to turn the village against Vianne. With all the odds against her, will she stay or will she move yet again? 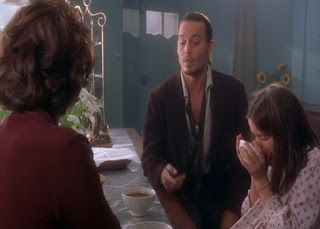 I will say Chocolat is a little worse than I expected but still a very interesting movie. I didn't quite think it was Oscar worthy, but I liked the characters and story for the most part. I can also sympathize a lot with Vianne being an atheist in a very Catholic community as I'm a extremely non-religious agnostic in a American state (South Carolina) where belief in the Christian version of God is much higher than the national average.  The plot is a little predicable and there isn't many moments where the story has much tragedy or bliss. The importance of Johnn Depp's character (while still notable) isn't nearly as I had expected so I found that strange. I never read the original novel to tell you if anything is worse or better, but I think the film is likable enough for most people.

I thought it was a cute movie but not as good as the book -which I read when it first came out. I did think the star was quite captivating though and not in a Hollywoodish sort of way. There is a sequel to the book, too, but it wasn't nearly as good as Choclat.

The movie was ok. I only watched it once.

One of my favourite movies! A fabulous parable about the hypocrisy of those who seek to impose their morality on everyone else. And of freedom versus conformity.

I've been on and off about watching this movie. Your review really helps!

This movie would've been even greater without Johnn Depp's character.

I did watch this film a while back, I quite enjoyed it.

It was quirky but in a good way.

Love the movie and the novel is even better.