Fact of the Day: Love For Elizabeth 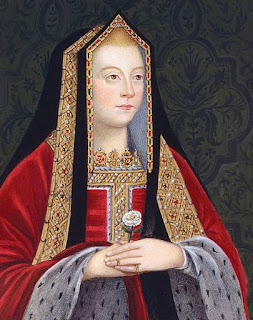 Elizabeth of York was perhaps the wisest choice to be Queen-consort for King Henry VII of England. The Tudor King took up the claim for the House of Lancaster, while Elizabeth was a member of the House of York and daughter of the deceased King Edward IV. Their children (such as the future King Henry VIII) would become heirs to both dynasties and cement their claim to the throne. While many political marriages often lacked love, King Henry VII was very loyal to his wife. When she died before him, he was so filled with grief that he refused to speak to anyone for days.
Posted by Adam at 12:00 AM

Quite a romantic story, which was indeed rare especially back in those days.

Never heard about it before!

And Henry VII was kind of a cold fish too so that's saying a lot.

That is interesting information and very unusual that he was so loyal. Love the portrait.

I didn't know Henry had such fond feelings for her.

so unlike henry viii

Ahhhh... It's so nice to hear about a happy marriage.

A royal love story ~ how novel!