Fact of the Day: Ugly Queen 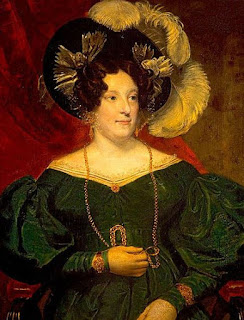 King George IV could of had living heirs today if he had not been so bitter in his own marriage. When he married his wife Caroline of Brunswick he was quite drunk at the wedding. He also considered her ugly and questioned her hygiene. He wrote a letter to a friend where he claimed to only have been intimate with her three times, which the third ended on the night after he was married. A daughter was born nine months later and she never had a full-sibling. When George IV became king he tried to prevent her from becoming Queen. She refused a divorce and while it was possible George IV was unable to get one. George IV was an extremely unpopular king and the public sided way more with Queen Caroline than him.
Posted by Adam at 9:46 AM

it seems to me that most of the women during that period were not very pretty...a lot of them had course features, receding hair lines and their dress wasn't very attractive, either...

That I didn't know and I'm not surprised.