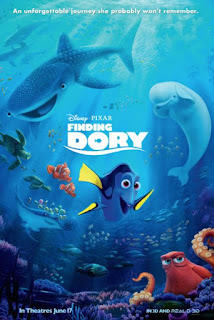 When it comes to animated movies, Pixar is the best...most of the time anyways. 2003's Finding Nemo was one of their best and it's rather peculiar that it took like 13 years to make a sequel. I was only 15 years old when the original came out. I also remember it being one of the last movies I really saw be available on a VHS tape as DVD had pretty much made it virtually obsolete by the time. Back when Finding Nemo came out, Pixar had not made a mistake. A few years later Cars came out and their track-record could be a little hit or miss. A decade and a half is a little scary for a a sequel to be in limbo. Especially as the title suggests a tale of deja vu. Is this oceanic tale another memorable classic, a worthy sequel, or an embarrassing disappointment? 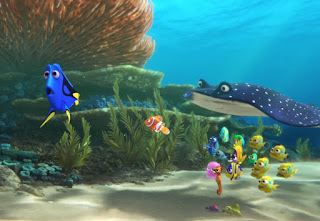 Finding Dory is set a year after the events of Finding Nemo. While Nemo and his dad Marlin are reunited and happy, Dory also lives with them too. Though she still can't remember that as a royal blue tang that she can't enter the sea anemones that protect clownfish from big bad fish such as the one that eat Nemo's mother and the rest of his egg-siblings in the original movie. Marlin still has to deal with Dory's terrible short-term memory. While the two clownfish consider her to be family, others like Mr. Ray the schoolteacher who is a spotted eagle ray considers her to be a headache. And Nemo's classmates thinks she's rather dumb. And to be fair, they're for the most part right about Dory because she can't remember anything long enough to do her much good. 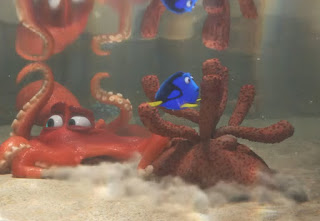 But one day Dory starts to remember something. Which is something that happened long ago. Something that is...her parents. Dory realizes she must of had parents, but faded memories of them reappear in her head from the times where she was a tiny baby fish. She recalls that they were from California which is not even close to where they are. Marlin asks the sea turtle Crush for help on traveling all across the Pacific ocean so they can find Dory's long lost parents. But bad things happen, and Dory is separated from her clownfish friends. She encounters an octopus named Hank who wants nothing more than to take her "place" at an aquarium in Cleveland, Ohio as he hates the actual ocean. But they make a deal where if he helps her find her parents, she'll help him get across the country to Ohio. 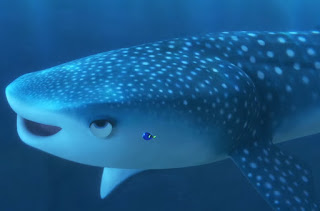 Finding Dory is a little worse and a little better than I expected. I did get hyped up for the film a few months ago but I didn't think it quite met up with the excitement. But it is far better than the deja vu adventure I was expecting originally when the movie was announced. To be fair it does a feel a little similar at times, but Dory and the clownfish don't really stay separated for that long and it's more like Finding Dory's Parents than it is Finding Dory. I still think the original is the far better film. But this one is a good sequel to it. Certainly not one of Pixar's best movies though. Now I wonder if they'll try to make it a trilogy or not.

I think that's a fair score, it was super cute movie but it did feel very similar to the Finding Nemo!

I've heard that it was a very good movie. Too bad I don't have little kids anymore to take.
Guess I could go myself.
But then, I'd probably end up on some NSA list.

Loved the original but haven't seen this one.

I basically fell asleep - not too good. :-D

I loved the original movie. I'm glad to hear that the sequel is good as well. -Jenn

I saw the original but not this one.

I liked the movie too. Baby Dory is the cutest thing ever!

I loved this movie. I think it's because of Ellen.