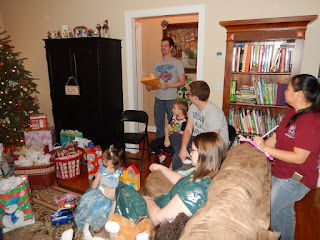 Every year in recent years we do the game where you get a gift and everyone gets to choose or "steal" a gift in a certain order. I always hated drawing numbers as there is no skill involved. So we played trivia to decide the order. Everyone played on a team and there was three teams. Daisy kept the score while I asked the questions. The winning team was my brother Zach, his wife Tiffany, and my mother which was a team my brother Steven dubbed "Team Tomato". Tiffany was the only reason they won. I gave other teams the chance to take "points" if a team got their question wrong. She picked up a lot of points doing such and that gave them the edge.
Posted by Adam at 5:00 PM

How fun...i love games at our Christmas Eve gathering...we play a dice game called LCR that's a lot of fun....

Fabulous moment with the familly. I love Christmas spirit :)