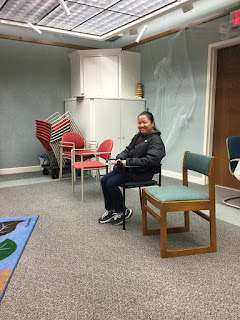 Not long ago I heard that one of the branches of our local library was holding a "holiday trivia" which according to what I read would be about other holidays around Christmas time from around the world. We got there early, and we see this room was filled up, but it was "story time" as the library is so tiny there is only one room for special events. Once it was over we went in. And waited for everyone else and the guy or woman running it. Eventually the guy who worked for the library came in, and we were the only ones who showed up. It was a rather mucky day of winter weather outside and while Pacolet isn't far away for us, it's very remote even for South Carolina. Luckily he didn't cancel it (which would of made our drive pointless) so we continued as a contest between me and Daisy. 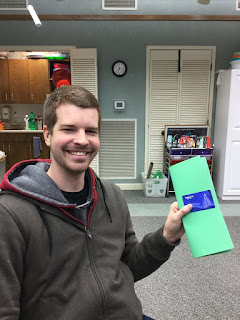 The questions were all Christmas related which is not exactly what I expected but they were based on traditions from all over the world. They were all true or false questions, and Daisy and I both ended up with three wrong out of sixteen. Daisy isn't very good at trivia, and she admitted she just guessed them. Which is why I don't like true/false questions. There was a tie-breaker question, and I got it right and Daisy got it wrong. So I won, but since there was only two of us she got a gift card too even though we didn't expect it at first.
Posted by Adam at 6:53 PM

Fun ! And nice pictures of you both !

This is neat and you got prizes!

Nice photos of the two of you.
Such a shame no one else turned up but you had to yourselves and won..

Neat that you got prizes.

Nice of them to still hold it with just the two of you there.

Very nice they didn't cancel on you...i always hate to hear a planned event has no one showing up...or only a couple...they probably won't do it next year.

A shame no-one else turned up ...
But great that they didn't cancel and you won prizes.
I like the photo's of you both.

LOL! What a fun story, and congratulations to the winner and runner up!