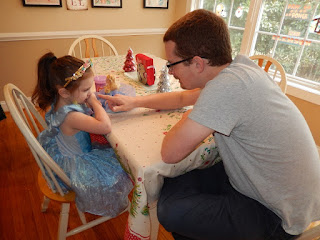 My niece Little K is very shy even around her own family. Like usual she'll give you a awful look and she was so mad about being there at the Christmas Eve gathering that she told her mom she was NOT going inside. She lost that battle obviously. Like usual she felt better later on. My nephews have a new pet guinea pig and my sister-in-law Amber asked Little K if she wanted to pet it. She got scared, and I told her it was just like a puppy. She said "That's no puppy" and mister guinea pig went back in its cage.
Posted by Adam at 5:46 PM

My youngest nephew gets shy too, until the other little cousins show up. Then, all hell breaks loose lol.