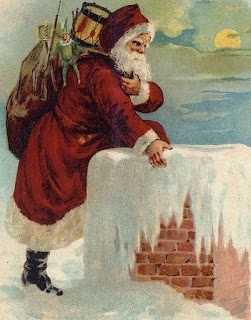 A Santa Claus in Forest City, North Carolina told a 9 year old boy "Lay off the hamburgers and french fries" which caused the boy to lose a lot of respect for himself and cry. While Santa did later apologize, he has since quit not long after the boy's mother demanded he'd be fired. I know we all say some stupid things sometimes, but if you're going to be Saint Nick you might want to stay positive all the time. Good thing the job is only about two months for the rest of them.
Posted by Adam at 10:00 PM

Uh- yeah- he might have stepped over the line on that one!

He deserved to be fired. No Santa should EVER attack a kid's self-esteem about anything!

Fat shaming is unmistakably cruel. No overweight person is unaware that they're overweight and no amount of shaming will prompt weight loss. I know this from personal experience.

He is definitely NOT the right person for this job. Be nice to the kids, Santa!

Sad thing as it is all about the little ones. The Santa;s definitely need to be screened better.